Practice and Politics of Marriage in South Asia 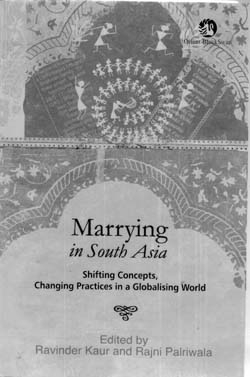 Upon being asked why she chose to marry following a very short period of courtship, a friend reasons that had she known the man too well, marriage, the one goal not open to compromise, would have been impossible. Longer courtships, she believes, lead to unsatisfactory marriages. On the other hand, we also encounter countless middle class professionals, both men and women, who insist otherwise. A common thread, however, runs through the two contradictory propositions: it is that marriages, whatever is the length of courtship, ought to happen and second, turn out to be satisfactory —notwithstanding the contextual and nuanced perception of conjugal satisfaction. While it is true, as the essays edited by Ravinder Kaur and Rajni Palriwala demonstrate, that the dynamics of marriage and the institutions related to it are subjected to deeper scrutiny in contemporary times, yet the value of the institution (plus the family) remains nearly completely unchallenged. For the majority there certainly is no alternative to the model of marriage. Even for the unmarried, widowed and divorced, for instance, the marital frame looms large on their social existence as it does, suggests Ashley Tellis (Part 5) in his moving and insightful piece, for the homosexuals. Such, indeed, ‘is the power of marriage and the dread of what lies outside it ….’ (p.18).