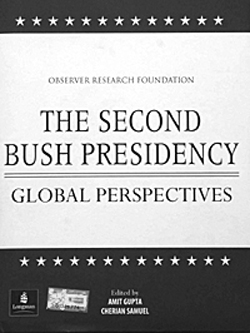 There is consensus that America is the only superpower, and that no one can prevent it from going its chosen way or hold it accountable. After 9/11 the voices of dissent and criticism were largely silenced in America and abroad. That has given the US President almost unlimited discretion and immunity from scrutiny. This book brings together views from around the world outlining possible scenarios during Bush’s second Presidency. One major issue, which deserves more space, is whether the role of civil society in US decision making can and will be restored, and how this could play out in the next two years, and after Bush. Another subject, which needs more attention, is the future of America’s relations with the Islamic world. These are certainly in the forefront of Bush’s foreign policy. Although it is impossible and unwise to club the Islamic world together and see it from any single viewpoint, a contributor from the Middle East would have helped make the survey more comprehensive. There is no contribution on international institutions, but that is understandable given the disinterest shown by Bush in them.