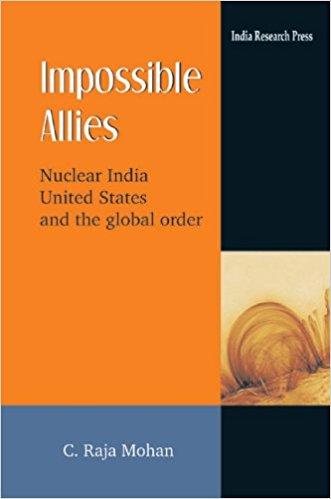 More has happened in taking India –US relations to higher levels in the last twelve months than in the preceding twelve years. The period has witnessed one of the most intensely argued public discourse on India’s strategic needs. The discourse involved political parties, India’s Atomic Energy Establishment, a host of experts in India and the US. Indian and US officials parleyed intensively and extensively to make it possible for a new strategic partnership to begin. The media in both countries went hammer and tong for and against the nuclear deal between the two countries. Major nuclear powers and others with nuclear capabilities or uranium and technology resources joined the fray. It had become a free for all for proponents and opponents of the deal. The dust raised by the intellectual melee obscured the fundamentals of the strategic issues for the lay observer. C. Raja Mohan has rendered a service to the experts and less informed alike, by compiling a readable and credible account of this tumultuous engagement between India and the US. Raja Mohan is a dependable strategic analyst who can be trusted to sift the grain from the chaff in strategic issues.

He has the rare ability to look into the future even while reporting on the ongoing and current developments. He is trusted both by the official circles and the reading public because of his record of not putting a spin on facts, or, lending his voice to ideological agendas. His speedily but effectively compiled record of the ups and downs in the process of getting the nuclear deal to come through will be closely read and used as reference material.

The book assesses the sequence, structure and dynamics of the Indo-US negotiations in the Bush Years. Notwithstanding the criticism of President George W. Bush and his policies on many levels, it cannot be denied that he has pushed hard to build a US relationship in dramatically advantageous terms with India. If things move in the coming months on expected lines, India would have come a very long way in gaining all its strategic aspirations since the nuclear tests of 1998. Raja Mohan’s valuable book records in clinical terms the history of India’s strategic evolution since 1998.

The book starts with the stunning drama of the July 2005 meet in the White House.The statements of President Bush and Dr. Manmohan Singh laid out the broad framework of the nuclear plan the two countries had hammered out. Each word in the Joint Statement had been fought over by officials of both sides, and as Mohan quotes an official, a litre of blood had been spent on each sentence. That statement was a bombshell which sent governments and officials around the world scurrying to understand its ramifications. This reviewer was in Australia with a senior military officer when a Foreign Office mandarin arrived flushed and waving the Joint Statement and quite stunned by its implications on Australian policies towards India. The impact in other parts of the world was no different.

The India –US Nuclear Deal as it has now come to be recognized, needed a tremendous amount of work over an extended period. Raja Mohan traces the engagement that had commenced after the nuclear tests of 1998 during the Clinton-Vajpayee period and culminated in the Agreement of July 2005, to be followed by the formal Agreement during President Bush’s visit to India in 2006. What comes through the painstakingly reconstructed sequence of events, is the continuity in strategic policies pursued singlemindedly by both the Vajpayee and Manmohan Singh governments. That is proof, if it was needed, that at the highest levels of political leadership India has been well served in the strategic arena. Political convenience and rhetoric often obscures that strategic continuity for the uninitiated. This book shows that Indian interests have remained paramount in the calculations of India’s high political leaders.

Raja Mohan takes the reader through the entire gamut of developments from the year 1998 till 2006. The account gets more exciting by the chapters as the narration, based extensively on personal and official statements, builds up a tempo leading to the final moments of the Bush visit to India. The important milestones of the Talbott-Jaswant Singh talks, with Brajesh Mishra taking over the process and bringing the much needed vigour and persistence to the effort are laid out at some length. The lead up to the Next Steps in Strategic Partnership (NSSP) and how that turned into Colin Powell’s Glide Path, the turns and tumbles the negotiation process went through make for a lively read. The arrival of Condoleeza Rice on the scene, and the role played behind the scenes by the much misunderstood Donald Rumsfeld, provides new insights into the sequence of events. The lead up to the Defence Framework Agreement signed by Pranab Mukherjee makes another marker in the journey towards the final outcome. When the Defence Framework was inked, there was considerable anxiety in India about signing away rights and autonomy to American interests. Raja Mohan’s narration shows how these separate and seemingly disparate elements formed part of an overall plan. There can be another view that questions the logical sequence that is made out in the book of the long process, through two Indian governments and the Clinton and Bush administrations. One can be tempted to wonder if the leaders and the officials really had such a clearly laid out road map. This is especially true in the light of Raja Mohan’s own account of the surprise denouement the night before the White House meeting in July 2005. The juxtaposition of individual initiatives, team work and the strategic vision of Bush and Manmohan Singh through a fine reconstruction of events, however makes a persuasive case for Raja Mohan’s analysis. As things develop in the ongoing pulls and pressures in the US Congress on the deal, we shall know more of such issues. What is clear from the skilful juxtaposition of facts and analysis in the book is of both India and US, working on the conviction of their mutual strategic interests being well served by the nuclear deal. They have also, as stated by Secretary Rice at the US Senate Foreign Relations Committee hearings, strengthened the nuclear global nonproliferation arrangements. The nuclear isolation of India that had held its relations with US hostage for decades had to be ended. This realization in Washington and New Delhi was a major strategic turning point in the history of India-US relations. It was in fact the culmination of the process of re-positioning India that had started after the collapse of Soviet Union and India’s own near economic collapse in 1989. This repositioning with its strategic and economic shifts had been started by Narasimha Rao and Manmohan Singh. Vajpayee and Jaswant Singh stayed on that course. It is in a way apt that Manmohan Singh brought that process of repositioning India in the new international order to its present advantageous juncture. Today, India is in the enviable position of having stable relations with all major military and economic powers. It is a condition that had been five decades in coming and one that is to be valued and sustained. Those who decry this strategic situation on the basis of outmoded ideological beliefs, would do well to note Raja Mohan’s perspectives on the future.

The book concludes by looking ahead at both the gains and future risks inherent in the new relationship that is being constructed between India and the US. If, as Manmohan Singh reminds Indians frequently, the future lies in sustained economic and technological growth, India can ill afford to be without a solid relationship with the US. The US leads the world, and despite occasional spells of delusion, about its military ability to set the world right, would continue to lead the world. Its real power, of its capacity to do good, is an asset to Indian strategic needs. India on the other hand believes, to use Raja Mohan’s phrase, ‘in marching to its own drummer’. The two great nations will need to work on each other’s strengths. That is the strategic need of the future. The nuclear deal is one part of that larger strategic mosaic. In reiterating that essential argument, the book makes a very valuable contribution.