Portrait of a Hostile World 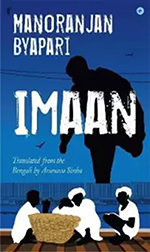 Bhai, there are maybe three or four thousand thieves and robbers and murderers and rapists here, at most. But outside, there are millions…An honest man is safe here, outside, his life is hell.’ This is how a beggar, convicted for no reason in the novel Imaan, shudders at the thought of being released from prison, only to confront corruption, violence, sexual predation and killings outside. This is also the conundrum that the eponymous protagonist of Imaan faces when he is suddenly released from jail at the age of sixteen, something that had been an ever receding fantasy all of his childhood and teens. With twenty rupees in his pocket, he does not know where to go or what to do for survival in a world he has never known. Ironically, the familiarity and security of the prison where he was born and brought up because his mother was convicted for supposedly having killed his father, seems attractive to him by contrast. Imaan wonders how he could get back to his older home, but the way in is even more difficult than the way out.

Similarly, in Byapari’s Interrogating My Chandal Life: An Autobiography of a Dalit, the jail is talked about as a place that can ‘cure’ one’s hunger. It serves regular hot meals to the inmates, though they are inadequate, so they also have to scavenge for scraps of waste that are barely edible. When Madan, which is the assumed pseudonym of the author-protagonist, is with another boy on the run, the latter explains how committing petty crimes and being compelled to spend a few days in a prison lock-up is a nice pay-off for getting caught while travelling ticketless. At other times, one has to work in tea shops to evade endless starvation.

The reality of the larger world outside in Imaan is a kaleidoscope of sordid, gruesome portraits of not just hunger and poverty, but prostitution, deceptions and grisly crimes including rape and murder. Here, it is considered good luck to spot a dead person in the morning. Human vultures prey on these corpses by practicing sexual aggression on their wives. Others sell truckloads of foodgrains meant for cyclone victims, while an old man who employs a little girl to look after him sexually assaults her every night. Prostitutes have to serve their customers on the same ground where people defecate by placing a plastic sheet in between that they meticulously wash. One must decide whether you want to be a hunter or a prey here—one could aspire to be a petty don of the micro-mafia or an exploited victim of this shady, scaled down underworld, where suicide, being murdered or starving to death guarantees liberation from such a wretched life. When the novel ends, Imaan is an honest rag picker with meagre savings.

Byapari’s own life of a petty criminal turned rickshaw puller turned writer turned political leader is a story of the rags (of poverty and illiteracy) to the riches (of education, a dormant writing talent and active social activism). But it is no fairy tale. And there is a blurred interface between the autobiographical, biographical and fictional in his works that I have read. Maran Sagarpare, Tomra Amar by Byapari, not translated in English so far, claims to be a novel, but is more of life writing.