Showcasing an Intimate World of Passion 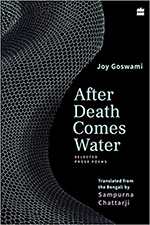 Someone who has not read Joy Goswami, in the original Bengali or in translation, would have missed the seminal compositions of one of the world’s finest poets. It is a daunting task to translate Joy Goswami, and it is no less daunting to review the brilliant translation of his book. Since I had not read Goswami’s trilogy in the original, I approached the translation with an open mind. In fact, it is Sampurna who has introduced Joy Goswami to the western world. Her translations are easy to read, especially for anyone who is trying hard to understand the unique colours of Goswami’s poetic diction and vocabulary. He borrows from several languages, Indian and foreign, thereby giving many of his compositions and specially his prose poems a stand-alone diction and glocalized flavour.

The current book is a translated trilogy of his three collections of prose poems: Solo for the Deer (Horiner Jonyo Ekok, 2002), No Shame in Bathing Before Your Mother (Ma’er Shamne Snan Korte Lojja Nei, 2012), and Whiplash (Shopaang Shopaang, 2017). If the fate of the human species has been an abiding concern of Goswami, so is the fate of the planet, in large parts of his poetry. In fact, he has been a forerunner of Eco-Poetics, much before it became fashionable.

Chattarji’s translation of his poems is to say the least, brilliant and evocative, bringing in the private personal tone of the poet in his whole landscape—anguish, passion, humour, joy and finally a sense of loss at the irreparable damages of time. Time wreaks havoc on the incandescent mind of the poet only to create a kaleidoscopic ‘magic realism’ in his rainbow spectrum of words! Joy’s poetry nourishes our mind, body and soul in addictive phases. There is nothing that Goswami’s poetry does not cover—personal anecdotes, societal myths, private and political narratives and the quixotic histories of the 20th and the 21st centuries as it touches his and our personal histories. His poems are the best example of this convergence.

My personal favourites are poems from No Shame in Bathing Before Your Mother. Enjoy the sense of urgency in this poem, the great sense of losing time.

Before your body breaks down any further, before you exit, admit what you have done and with whom, admit it to your wife, your daughter, say it, say the world is a lump of heart, at night this world falls into your hands—you sit clutching it with both hands… before dawn that world, that lump of heart will burst silently, before that, say o moronic death, because there will be no time afterwards.

Joy Goswami travels several worlds through his poetic odysseys, his imagery is new and unrivalled, he is never repetitive, and wears his erudition very lightly on his sleeve. He draws and borrows from the world of the epics, science, history and mythology with the same felicity and ease as he draws his vocabulary from diverse sources. His poetic energy and sensibilities are unmatched, he is truly unique in his superabundant imagination which never allows our interest to flag in his writings. His books are usually unputdownable like detective fiction perhaps! Consider this perfectly romantic passage from ‘Solo for the Deer’:

You could even call it a poem

If you object so, be it but say

it just once with all your soul

Say there’s nothing I haven’t imagined doing with you

Say there’s no sea on this earth

On which I haven’t made my bed with you.

Goswami’s poems are abundant in imagination, linguistic variety, cultural heterogeneity and mythical narratives. It is difficult to put this new collection of poems in any category. In any case, his poetry has always defied a lineage or categorization. Joy can be seen as a post-gharana writer in a post-globalized world—global in a panoramic sense, yet distinctive in a local sense. He is simply inimitable in his poetic flavour, vocabulary and text which captures the postmodern cycle of uncertainty, transformation and rediscovery, better perhaps than any contemporary poet. Look at this prose poem from ‘Solo for the Deer’.

This is the double life. Night and day, snake and mongoose, thief and householder holding hands, this life, who knows when one will enter the other, my body is an illusion, I can’t even say anything to anyone. I tell the madman about rocking the boat and I tell the poor man, come to me, I’m a field of greens.

Sampurna Chattarji’s translation has woven afresh the need to invent and reinvent language boundaries, to include intractable expressions and retrieving texts from different cultures and environments into the framework of contemporary knowledge and understandings. Chattarji unmakes and then remakes the challenges of the original, learns and unlearns courageously to translate the works of a writer whose language is virtually not ready for translation. Reading After Death Comes Water is neither an intellectual exercise, nor an experiential one; we have simply to allow ourselves to be defamed, swept into a world of passion, love and conflict within our minds and souls with as much inventiveness as possible to coopt Joy’s world as our own.

Since morning I’ve been scraping away the mask from my face with a thin sharp knife. Almost done. Not a drop of blood. What emerged was a skull. Now I’m writing the world DANGER below it.

In Goswami’s visionary poems, the 21st century appears to be as dark and lighted, as detailed or as brief, as long and dexterous, like the truths of our heart, which can hit you even with a single phrase that leaps at you and drags you to more and more of his addictive verbal exuberance as you move along, poem to poem. Joy’s world seems alien at first, it is only after several readings that you enter his magical world with such felicity, that they become your very own to be read and relished at leisure.

In Sampurna’s dexterous and creative translations, Joy’s poems never move away from the original content and message, they seem so rooted, living and real. In Joy Goswami’s poetry, even eternal and recurrent images of Nature are refounded and updated as if they are 21st century occurrences only, so fresh is their representation. Look at these lines.

Joy revels in contradictions, in literary histories, images and narratives, his language is like an endless migratory bird, still seeking a place to settle which has a whiff of Paradise or Hell, one does not really know. He could settle in either, the body’s odyssey doesn’t bother him much, since he is forever distracted in the odyssey of the mind. In all his mind travels however, he searches out the heart of the experience. Notice the lines from the ‘Solo for the Deer’:

But my dear deer, I’ve recognized you. You’ve risen from the books of Goethe. You had to traverse all our Puranas to get here—hence this disguise. You are Mephistopheles but I am not Faust.

I will now only invite the reader of After Death Comes Water to enjoy the madness, the melancholic, the mysterious and the enormously innovative, dreamy and visionary world of Joy Goswami brought live by Sampurna Chattarji’s powerful, inventive and scintillating translation. An amazing read indeed!