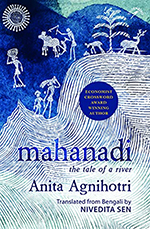 Majestic River as Tragic Protagonist
Sumanyu Satpathy
MAHANADI: THE TALE OF A RIVER by Anita Agnihotri. Translated from the original Bengali by Nivedita Sen Niyogi Books, 2021, 485 pp., 595.00
July 2022, volume 46, No 7

Let me begin by saying right away that Mahanadi is a brilliant piece of novelistic work that combines anthropology, ethnography, history and fiction rolled into one. It is a significant addition to a growing number of new fiction in India that sees human lives and relationships as being inextricable from their surroundings. But one does not really care about fictional categories when confronted by a novel like Mahanadi. Yes, to state the obvious, the novel is about the river, the great (maha) river (nadi) caressing the Eastern Ghats at places during its long journey.

Originally written in Bangla and now ably translated into English by Nivedita Sen, this novel of great merit is, in a way, my ‘Discovery of Odisha’ (to rephrase the title of the famous book by Nehru, a prime mover of modern India’s destiny, and who is alluded to in the novel. In fact, given the importance of the Mahanadi for Odisha, it is surprising that no Odia author has so far thought of writing a novel like Anita Agnihotri’s. Of course, there are poems galore in Odia on it. And there is a popular song sung by the legendary singer Akshyaya Mohanty that comes to mind. It celebrates the cultural diversity in different regions of Odisha through imaginary encounters of the singing voice with Odia girls in different locations along the bank of the Mahanadi from Sambalpur to Cuttack. But there is nothing in Odia literature that is comparable to the epic scale in which Mahanadi with all its grandeur and majesty is depicted in Agnihotri’s novel. Tragically, we learn through the novel that some of the most apocalyptic misfortunes (both human and environmental) in Odisha’s modern history were caused by that famous tryst with destiny.

Each of the twelve chapters has a different plot, a distinct cast of characters. But, the stories are all gently strung together by the grand river. As the author says in her epilogue, ‘The immense waters of the Mahanadi will reach the sea, chronicling the unbroken community in the grand narrative that recounts the life story of the human race.’ Agnihotri has succeeded in making them all cohere. The authorial voice narrates the joys and woes of people; joys that turn into woes, in fact, of whole communities, who are either alienated or displaced and wrenched away from their habitat in the name of development, when large valleys are submerged in order to build a dam or vast areas of land are handed over to unscrupulous capitalists to build mega projects. We cast our votes in favour of our representatives on the basis of such welfare projects. But the cries of those thus deprived with little or no material or emotional compensation remain unheard. To describe these, the novelist uses a technique that is astoundingly new, and yet miraculously successful. While spinning the yarn from intensely personal experiences, the author succeeds in ensuring that the narratorial self is rendered invisible allowing the characters, situations and emotions to play on the reader’s heart and mind. Each chapter carries a stand-alone narrative, which, if extricated from the copious description of the environment, local history, setting, flora, fauna and the culture of the community in question, can still move the reader, but will not be as impactful.