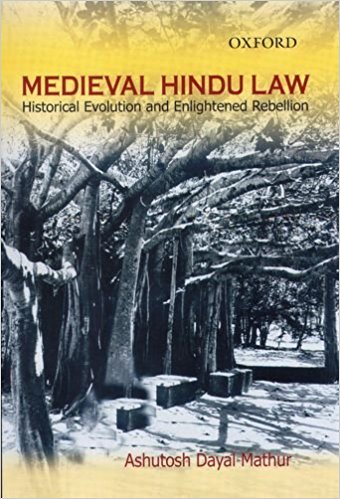 The book under review is a modified version of the author’s Ph.D. thesis submitted in 1997, and has taken a full decade to appear in print. The author, far from being distressed at this delay, is actually ‘glad’ that it ‘has taken so much time to appear as a book’. He notes in the preface, ‘This period has witnessed a change in the perception of “scholars” on cultural issues. From a rigid and uncompromising opposition to tradition as against “modernity”, they have moved to a more understanding attitude towards “traditional” societies. Good. I might just escape being accused of fanning any communal or fundamentalist agenda or of being inspired by a false nationalism.’Yes, indeed there is some ‘change in the perception’, but only to a very limited extent. Werner F. Menski observes in his study of Hindu Law, ‘Various myths exercise a powerful influence in this field . . . the subject is not only extremely complex but also politically loaded’ (Hindu Law: Beyond Tradition and Modernity, 2003, p. xvi). This is true not only of the field of Hindu law, but anything ‘Hindu’.

The very idea of the ‘Hindu’ is a contested one. We are told that ‘Hindu’ is just an ‘imagined’ tradition and community (as if the others are God’s own, ‘real’ creations!). The ‘imagined’ (that is, transformed in the historical process) nature of Hindu tradition and community, far from being taken as a sign of its historical evolution is held out as a sign of the term ‘Hindu’ being academically untenable and politically reactionary. Menski rightly reminds us that in order to objectively evaluate the process of the historical transformation of Hindu tradition, ‘academic censorship needs to be resisted in this age of political correctness’. And, as we all know, self-censorship (particularly of the politically correct variety) is the worst of all. It is indeed heartening that Ashutosh Dayal Mathur has finally chosen to publish this significant work, in which he succeeds in exploding many myths without losing his grip on the complexities of the subject.

The foundational myth determining the academic approach to things Hindu is expressed most eloquently in Louis Dumont’s well-known phrase: ‘Homo Hierarchicus’. Underlying this phrase is the notion of ‘an absolute distinction between power and hierarchical status’ which according to Dumont, was established ‘some eight centuries before Christ’. Dumont finds Hegel as having gone further ‘than many a more recent author’ as far as the understanding of the essential dynamics of Indian society is concerned. Since this ‘core’ was established centuries ago, and was supposed to have been divinely ordained, hardly any significant change took place in Hindu tradition so far as the ‘absolute distinction between power and hierarchical status’ is concerned. In other words India had no history proper. Now, if you are a ‘traditionalist’ you can celebrate ‘eternal India’; and if you want to ‘change the world’, you can lament the ‘stagnant’ India and, can blame ‘Hinduism’ for the arrested march of history in South Asia. The Hegelian superstition of the precolonial Indian society being bereft of any history proper and thus hopelessly ‘frozen in time’ continues to dominate the mindset of ‘many an author’ till date.