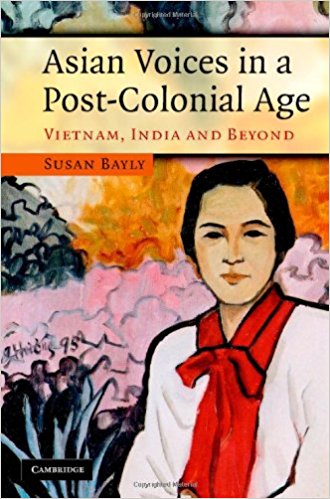 In Asian Voices in a Postcolonial Age, Susan Bayly presents a perspective on the two countries, Vietnam and India, with a focus on the former, as India primarily steps into her narrative from a comparative vantage point. The commonalities between the two countries are significant—both of them are postcolonial; both have espoused socialism either officially or otherwise; both countries have even undergone traumatic partition, though the reasons and the trajectory have been different. However, underneath this facile comparison, we find two countries, which have taken ‘dramatically divergent paths in the aftermath of empire’ (p. 4) and the author does not intend to underplay these differences. However, she points out that a reluctance to engage in a comparative study of the two might result in much scholarly attention being diverted from the similarities which she hails as equally significant and has tried to expound in this study. Such a book (primarily) on Vietnam has been justified on the basis of the ‘legacies of colonialism and socialism [that] have played out [in Vietnam] in ways that challenge many current understandings of postcoloniality and the moral and social ambiguities of ‘late’ or post-socialist societies’ (p. 1).

The methodology of the book is anthropological but the author has also tried to fuse it with an historical approach. We shall come to the methodological dimension at the end of the review. The conclusions drawn in the study are based on interviews and personal conversations with the intelligentsia of the two countries. In the case of Vietnam, it is more of interviews with ‘informants’, while in the case of India, she has used her personal memories of India and interaction with Indian intelligentsia as an ethnographic resource. The focus of the book is how this particular intelligentsia class has come to constitute its ‘modern’ identity in the postcolonial and socialist society that it finds itself in.

In the course of these interviews and conversations, Bayly found the family (the ‘cultured’ family, one might underscore) as a common and central motif, metaphor and point of reference; and the vocabulary of affect and familial (both conjugal and parental) ties as the language deployed to articulate a ‘modern’ self. It is this language that pervades, according to her, not only the dominant social discourse at home but the interaction between various countries is also conceptualized in familial terms.