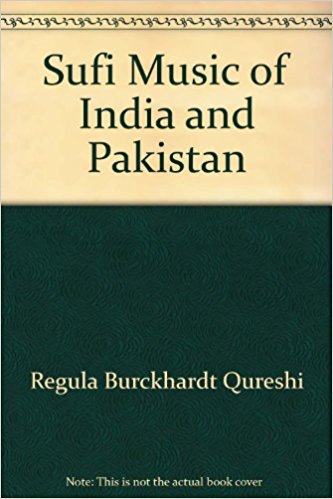 This book has been in print for almost thirty years and it is a tribute to Regula Burckhardt Qureshi and her pathbreaking account of qawwali that she has had such a loyal readership in India and Pakistan, the home of this pre-eminent form of sufi music. Qawwali together with ghazal and khyal was one of the genres of music to be recorded on 78rpm discs from the early decades of the twentieth century. From the 1950s qawwali was also widely used in Hindi films giving it an audience and reach of the commercially popular song. In fact the setting of Hindi film qawwali is usually romantic, a pretext for the hero and heroine to sing coyly to each other which obscures the fact that traditional qawwali is sung mainly in a dargah and is a deeply religious experience. The latest (and notorious) example of transformed qawwali in Hindi film is the hit song “Kajara Rey” from “Bunty and Babli”. However there also existed patrons who often organized qawwali performances during Holi to mark the advent of spring, but such occasions have more or less gone out of fashion.