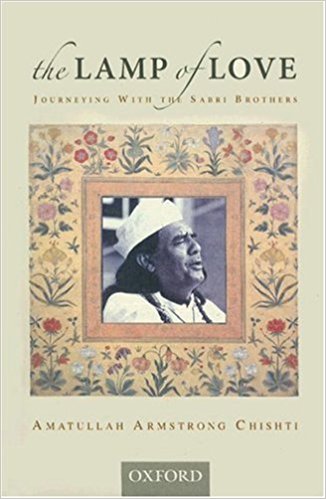 The Lamp of Love is an account of the writer’s experiences of travel, first to Pakistan, and then with the famous Pakistani qawwali singers, the Sabri brothers, to various Sufi shrines in India and Pakistan. The work is however neither a travelogue in the conventional sense nor a book about music: it is best described as a personal account of faith and spiritual conversion. The account is unusual, to say the least: the writer was an Australian national, and she describes how she experienced a vision of the late Haji Ghulam Farid Sabri, which drew her to the Sabri family with whom she finds a new home. The cultural and familial transposition is interlarded with the story of a gradual absorption in the spiritual realm of the Chishti silsila or tradition. Visions, dreams and miracles figure largely in the account. The book we have is the fulfilment of a mandate received in a vision; however, the author’s engagement with Islam appears to be of longer standing. That too, we are informed enigmatically, came out of a dream.

It is difficult to assess a book so uncompromisingly based upon belief in terms of autobiography or travel narrative. The journey, as Amatullah Armstrong Chishti makes it clear to us, is to be mapped in spiritual terms. As one might expect in a narrative of this kind, it is punctuated by moments of crisis or epiphanic vision. The point of the book appears to be its description of the writer’s discovery and engagement with the Sufi tradition. The book gives an account of Sufi devotional practices, especially about the part played by music. Sufi saints and their legendary histories feature largely in the account. The book however makes no claim to objectivity: the writer’s interest is entirely in the Sabri clan and their music. One should not therefore expect a coherent account of the qawwali tradition and its phenomenal spread throughout the world in recent times. What we have instead close personal vignettes of the Sabri brothers, especially of Mehmood Ghaznavi Sabri; though the book does not make this explicit, the journey that begins with the vision of Haji Ghulam Farid ends in the marriage of the author with Mehmood Sabri.

The style of the book is elliptic and sometimes extravagant. The past and the present merge, making it difficult to reconstruct a chronology of events, but that is hardly what the book seeks to give. A kind of stylistic excess is not uncommon in works dealing with or emanating out of “mystical” traditions, and this work is not free from it. At the same time, one senses that there are silences and elisions in the account of the writer’s cultural re-orientation. The occasional references to practices or events that the writer finds difficult to adjust to suggest that the acculturation could not have been an easy one; one misses more information on this account. It is quite natural, one feels, that the writer should have taken up the contentious issue of the permissibility of music in Islamic culture, and presents a strong, though necessarily one-sided view of the matter. The writer also expresses her resentment at the brusque manner in which she as a woman is denied entry to holy shrines. Less comprehensible is the debate over the relative positions of qawwals and ‘khadims’ (hereditary attendants) at the shrine of Mui’nuddin Chishti at Ajmer Sharif. The work continually uses dreams, visions and inner promptings as the means of validating personal experience. The markers of material existence, such as videocassettes, compact discs and mobile phones, mingle easily with the tropes of the marvellous.

The Lamp of Love leaves one somewhat bemused, for it raises questions that is does not answer. However, the subject is likely to be of interest to the ever-increasing number of devotees of Sufi music in the subcontinent and elsewhere, though as we have seen, the work focuses exclusively on the contribution of the Sabri family. One of the attractive features of the work is that scattered through it are verses from Sufi masters, many from the incomparable Maulana Jalaluddin Rumi.