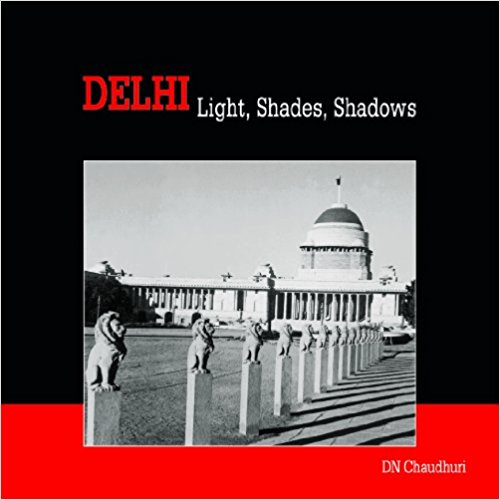 On many a bright winter day, we would see an English family sipping beer or tea in their flowering garden, with a couple of spaniels or retrievers, jumping around them, playing with a tennis ball.

Something about this city, lingers… its formidable fortress looking across an imaginary river, the spirited galis, the pungent trail of an open bazaar, soft yellow light filtering through trees in the autumn, the heavy haze of a smoky winter’s night before a mesmeric dawn, a crackling radio reverberating with Bollywood’s vintage songs, edifices of grandeur that emerge in the distance with an overhead metro winding soundlessly on its way, carrying the millions who have flocked to the city, or leaving the city, and even those who disappear into the folds of humanity as the years drift on. Yes, Delhi was once humane, and agreeably livable.

D.N. Chaudhuri’s compelling soft-back volume published by Niyogi Books in 2005 stirs many contours of experience from his early childhood to crackle with life as he begins using the camera as a teenager, more specifically a box camera in 1952. The visual and literary interweave in dexterous harmony, cajoling the reader to sit down, open the book and simply, connect. However the text engages with carefree measure in complex discour-ses-social, political and cultural-to be seen as a seamless thread that ties land to people, people to place and the latter to an artistic, almost altruistic anomaly created through the lens. His self-assured, yet lucid prose captivated me, from the very start, from the moment of his first exposure to puraani dilli, after arriving in Delhi on March 31, 1942 from Kolkata aboard the coal-fired, steam-puffing, Toofan Express. Delhi emerges as a city of hope as well as transition, leaving open its vast vistas and small pockets of habitation to be consumed by ideas, by tangents of fate and friction.

The publication is as much a chronicle of the city as it is a personal memoir of the author, whose life begins on Nicholson Road at the P&O Building with his family-a firm yet giving father who was a political agent of Subhash Chandra Bose, and later employed in the All India Radio. Residing in Old Delhi till his marriage in the mid-60s, his world is enmeshed with explorations through sense and sound. The evening azaan emanates from a mosque, fusing into chimes from a nearby temple and a Church in the distance, even an occasional roar of a lion from the Delhi zoo!

This trajectory of life, when the railway stations seemed near-abandoned and clean, when the roads that led to South Delhi were barely driven, when office goers and staffers used bicycles and stopped by their neighbours for tea, when listening to the radio seemed as though the distant future had arrived revealing joy and despair as Gandhi’s death was announced by a bereaved Nehru, when the riots that marked the capital can still be recalled in complete detail, when time and resources were never wasted but spent in learning, with family, with friends. This is the world that Chaudhuri experienced and such is the writing that allows you to sit back and enjoy the view from his window, curtains drawn apart.

‘I often used trams to reach the interior of Shahjehanabad.’ The light, shades and shadows that would have captured such moments are then references to the past, present and future, they are intimations to shifts in the author’s life, to the Quit India Movement of 1942 that saw burning trolley cars, they are metaphors for time, space and living, ways in which the city can be seen with strolling Jaguars, Rolls Royces and Cadillacs, terms that rouse the myriad histories, of blood, toil and transcendence, iconographies that shape the way in which he has revealed the city, and explored it from all cardinal points.
As we were passing the Municipal Town Hall to enter Queen’s Garden, the clock tower above us began to strike seven with its characteristic deep chimes. In less than three months this clock tower crashed down one morning and some of the unfortunate passers by were seriously injured…This seemed symbolic. The crashing of the clock tower got juxtaposed in my memory with the deepening shadows that were an inevitable result of Partition, of separating families, of bloodshed and gore, of tragedies and trauma.

These are the sentiments of a veteran Delhite, trying to grapple with memory, a shadow, and if they are points of engagement and remorse, of a modern prose as driven as Hadul Halim Sharar’s Last Phase of An Oriental Culture, or witty and grounded as P.G. Woodhouse or Rudyard Kipling, then this publication is testimony not only to the life of a photographer, but a philosopher, and a human being who has witnessed the birth a modern city, its years of nation-building to its days as a metropolitan, cosmopolitan trap, a city of contrast and variance, where the trajectory is about where you stand and how you live.
We began to frequent the vast open area of Delhi Zoo and while I kept the single lens reflex camera with a telephoto lens to myself, my pupil (his generic levitra sale wife, Malabika) had to be satisfied with an old Rolleicord camera, which she managed to use rather well.

At the heart of much of this publication is photography, struggling to pursue it, experi-menting with it, making it a part of a relation-ship with his wife. Inspired at an early age by the work of T. Kasinath, photo editor of the Publications Division in the Secretariat, he is drawn into many worlds, even teaching at the SPA in his early days. However, while looking at them in print, one is resigned to wish for better quality, more depth, perhaps even a larger format for the publication as a whole, and certainly many more images. It may have helped to communicate how the city is a living memory and that memory has been etched, captured and preserved forever, comprehensively.

The images and texts are divided in sectional form. Briefly, we see a transition from light: bullock carts near grand old havelis, trains rushing into the city; to shades: Con-naught Place with carts and cyclists slowly passing by, a near empty foyer of the railways, flypast on 15th August with fighter jets dotting the sky; to shadows: of the bus near North Campus at night, a well outside LSR College(!) and even the author posing proudly on his Lambretta. All of these document, report and recall the languid pace at which the city once moved, how hard it was to travel from Haryana to CP, and how much effort and time was given to visiting friends. His images are not similar to the sweeping world of Raghu Rai, nor the social commentary of Sunil Janah, or indeed the political life assiduously documented by Homai Vyarawalla. This is a personal tale of engagement, of how photogra-phy mattered to an individual because the city lent itself gracefully and unabashedly to him. It is documentary photography as the art of social commentary.

In 2003 on his birthday, Chaudhuri takes a final excursion through the Delhi of his earlier days. After walking around the palace of Begum Samru in the old city he attempts to move on to the ridge in an autorickshaw, but finds that the general behaviour of these drivers in Delhi is more strange than that of a March Hare in the tale of Alice in Wonder-land. He continues on a cycle rickshaw, which proves better for taking photographs.

I was also reminded of other authors who have created narratives from history through the study of urban space. I thought of the academic prose of Upinder Singh and her comprehensive study of the monuments; of Narayani Gupta and her unravelling of almost every historical corner of the city; of Romila Thapar’s archaeological and anthropological investigations, of Sam Miller and his meanderings through the heart of Central Delhi; of Dalrymple and his rich, at times comical and certainly steadfast entrenchment in the life of the city; of Percival Spear’s Seven Cities, of Eckhart Ehler’s mapping of Shahjahanabad…and suddenly I realized that this publication reflects all kinds of prose styles through anecdote, through the act of making notes and reliving, through the intonations of feeling, of deep, living concerns about a cherished city.

He jestingly, and somewhat irritably notes how some transitions were a little difficult to handle, especially on one occasion while attending a ceremony at Ashoka Hall of the Rashtrapati Bhavan in 2001. Though the invitation card had mentioned quite clearly that no mobile phones would be allowed inside the ceremonial hall, most of the VIP guests could never think of parting with their inseparable electronic companions. This was typical of many politicians, high officials and media personalities of the 21st century Delhi.

So shutting this book, I am certainly not closing the chapter on it. I will be drawn to revisit it, with a sense that I too am part of a chronicle, that of reading this book at this time in my life and feeling that I too am privy and part of a crosshatch, checkerboard, mishmash of sensibilities that governs my daily rendezvous with Delhi. That sitting in a small flat in South Delhi, writing this piece on a Sunday morning, while around me, 30 years ago, I would have seen the Qutub in the distance, heard the call of peahens and sat on a roof, listening to the radio, leafing through the newspaper, and would have been startled and excited to see a vintage car drive up.

In those days there was not a single flyover or underpass all along the route on Mathura Road. As chance would have it, every time we came across level crossing, and there were no less than three, most of them closed. Since old cars had no working self starters, every time we stood at a railway crossing, some of us had to jump out and crank the starter handle of the vintage Chevrolet or pushstart a good old Austin Ten…

Mr. Chaudhuri, thank you for sharing.