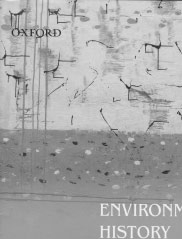 The slight sarcasm added in the subtitle to Environmental History,as if nature existed, triggers questions for the reader of this volume. Why as if? Are we to be taken en route through a landscape of perceptions and constructions, or are we brought to see the raw realities behind benign conservation regimes? Or is this a question for the environmental historian, an initial word of caution not to take nature for granted in our analyses? McNeill, Pdua and Rangarajan have taken on the challenge of bringing together scholars who are broadly engaged within two disciplines that at times communicate via the medium of economic history. Mostly, economics and history move in separate spheres; the novelty of this volume is the attempt at bringing economists and historians together to debate crucial socio-political questions of ecology and environment. Framed as two subfields at the margin of their disciplines, ecological economics and environmental history are set on making sure that nature both exists and matters in economic and historical research.

The two fields have matured over a long period of time. John McNeill traces their trajectories from the early decades of the last century. But as for many other research fields that have come to dominate the centre stage in the present, the sharpening of research fronts in the 1960s and 70s were crucial for the formation of what we today discuss as ecological economics and environmental history. McNeill is representative in seeing the emergence of ecological economics in view of lack: the lack within orthodox or neo-classical economics of keeping nature as a variable and a context. Nature had either disappeared or had been banished to the margins. All the complexity, the regular patterns, and the unpredictable swings of nature were reduced to the term land, which together with capital and labour, was the holy trinity of the economists faith, writes McNeill. For several of the authors in this volume, it is evident that radical theoretical frames as that of political ecology is an inspiration. The authors want to see change and themselves be part of contributing to better futures. Several of the contributions also end with hypothetical future scenarios and policy prescriptions.