Pepper and the Portuguese: Tribulations in the 17th Century 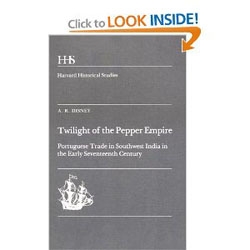 Pepper and the Portuguese: Tribulations in the 17th Century
Richa Kumar
TWILIGHT OF THE PEPPER EMPIRE PORTUGUESE TRADE IN SOUTHWEST INDIA IN THE EARLY SEVENTIEENTH CENTURY by A.R. Disney NA, 2010, 220 pp., 695
August 2010, volume 34, No 8

The book, was first published by Harvard University Press in 1978. At that time, it was one of the few studies on the Portuguese em-
pire in Asia focusing on the 17th century and specifically on south-western India and was hailed as a major contribution. The book has been republished by Manohar in 2010 (without any revisions) making it accessible and available once again to historians and scholars in India. It covers the first four decades of the 17th century documenting the decline of the Portuguese empire and a last ditch attempt to save it through the creation of an India Trading Company. Starting with a geographic orientation and a brief political history of the main principalities and kingdoms in the pepper growing areas of Kanara and Malabar on India’s south-western coast Disney devotes an entire chapter describing the production, processing, transport, buying and storing of pepper, whose trade from India to Europe was a monopoly of the Portuguese Crown.

This chapter elucidates the constraints imposed by the production cycle of the pepper plant and the characteristics of pepper on the profitability of the Europe-Asia trade. The book then shifts focus to the fiscal crisis brewing in the viceregal capital Goa from the late 16th to the early 17th century. The military challenge mounted by the English and the Dutch on the pepper monopoly had increased the financial burden on Goa and reduced the customs’ receipts of the Portuguese Crown. In addition, corruption of local officials was widespread and the situation was exacerbated by general inflation. The poor condition of ships and the recruitment of young boys as soldiers in Lisbon resulted in high rates of death and desertion by the time they reached Goa. All this made it difficult to fend off the Dutch and the English.