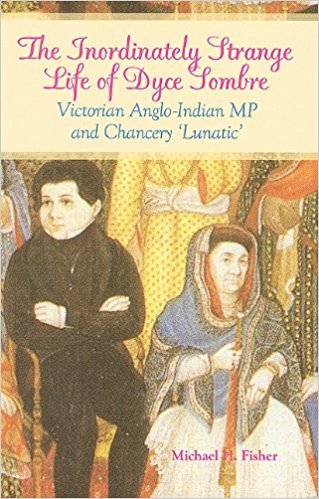 Dislocation and rootlessness are modern phenomena which stem from the emergence of the nation state and has opened up an entire arm in academics that focuses ‘on those moments or processes that are produced in the articulation of cultural differences.’ As Homi Bhabha puts it, ‘The move away from the singularities of “class” or “gender” as primary conceptual and organizational categories, has resulted in an awareness of the subject positions—of race, gender, generation, institutional location, geopolitical locale, sexual orientation—that inhabit any claim to identity in the modern world.’ It is in this context that one could read The Inordinately Strange life of Dyce Sombre: Victorian Anglo-Indian MP and Chancery ‘Lunatic’, as many of these categories like class, gender, race, geopolitical locale, the location of culture in itself are interrogated through Dyce Sombre’s life.

Michael H. Fisher‘s nonpartisan biography of Dyce Sombre throws open naturalized certitudes in the nation state model for interrogation. By astutely capturing the inordinately strange life of Dyce Sombre, he opens the tools of the nation-state for questioning that build, sustain and challenge the normalization of culture and social norms, which suppress rather than express individuality. Dyce Sombre’s life, amidst various things is a site on which cultural and historical forces play out.

The very thought that Dyce lived and died as a man without citizenship, shows how questionable the notions of citizenship were and continue to be so in our lives. Dyce Sombre’s case exposes law as being a purveyor of culture rather than being perceived as an agent for establishing and ensuring principles of equity. Thereby the biography questions the ability of law to arrive at ‘truth’.