A Regime of Violence 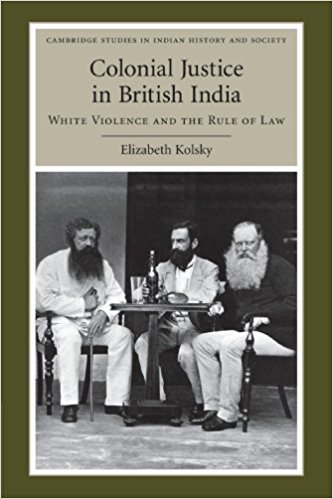 A Regime of Violence
Srimanjari
COLONIAL JUSTICE IN BRITISH INDIA: WHITE VIOLENCE AND THE RULE OF LAW by Elizabeth Kolsky Cambridge University Press, 2010, 252 pp., price not stated
August 2010, volume 34, No 8

This cant about England’s ‘mission’ in India is an afterthought only. Clive and Hastings would have laughed at It is no exaggeration to say that the English school-boy is a young savage At an age when liberal studies should begin to expand his mind and social restraints should curb his egotism and form the heart, he is at once placed as a ruler over millions of men … Comparing himself with the meanest and worst types of natives, with whom alone he comes in intimate contact, he fancies himself a veritable god … In the most exclusive country of Asia no foreigner is treated to such wanton cruelties and consistent insults as the native in India by his alien rulers. This is the most striking inequity of the English domination and a mirror of its character. It needs no power of prophecy to say that this grievance will be the proximate cause of the next serious trouble in India. It is something whose nature no sophistry can disguise, no hypocrisy can smooth.’
Amrita Lal Roy*

In recent years, historians and legalists have explored the complex and multidimensional aspects of the functioning of colonialism in India. Numerous works have drawn attention to the close connection between the shaping of colonial construct and the role of legal system. Eric Stokes (1959) in his pioneering work1 delineated the various ideological influences—varying from Orientalist, Anglicist, Evangelical and the Utilitarian—on the process of making of Anglo-Indian law in the course of the nineteenth century and the extension of the legal and punitive claims of the colonial state. A rich historiography in the ensuing years has highlighted the interaction and interdependence between the European and Indian agency in the functioning of colonialism. Elizabeth Kolsky’s work does this and more. It resonates with the sentiments expressed above by Amrita Lal Roy more than a hundred years ago.The author contends that the history of violence in British India cannot be understood by traversing from one cataclysmic event to another; rather, the macro-events in between the major episodes contain the violence that was central to the working of the empire.