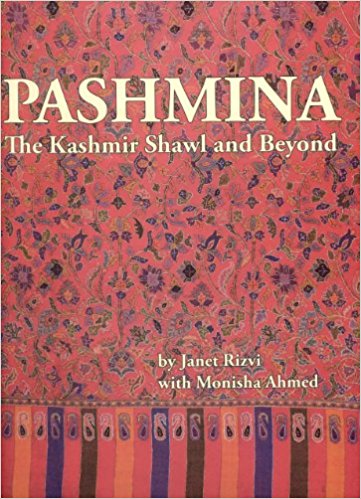 Janet Rizvi, with Monisha Ahmed has, after six years of intensive research, written a book on Pashm, Pashmina and the textiles woven from this incomparable fibre which promises to be the most authoritative book on the subject. I am myself a great admirer of William Moorcroft, whose travels in the northern mountainous reaches of India and beyond in the first half of the nineteenth century were as legendary as his writings on his travels, and I find that Janet Rizvi is cast in the same mould. There is one difference. Moorcroft travelled in Ladakh and the adjoining areas of Tibet. Janet has travelled in all the countries where pashm or something similar is used as the staple for weaving an exquisite fabric which, incidentally, is also amongst the warmest of all cloth known to man. I deliberately harking back on Moorcroft because whilst Janet has taken the writing of Moorcroft as a reference point, she has travelled very far along the road charted by him and discovered a world much larger than was seen by Moorcroft.

No doubt she has been helped along the way by many wonderful people, Frank Ames, C.A. Bayly, Alexander Burnes, Moti Chandra, Mirza Haidar Daughlat, Anamika Pathak, Haji Mukhtar Shah, Susheel Wakhlu and a host of others.

Janet begins with the definition of three words, pashmina, cashmere and shawl. The present meaning of the word Shawl is a shoulder mantle, or a wrap which one drapes around the upper torso. According to Janet, however, the word is derived from the Farsi Shal, whose original meaning was various kinds of woven material. Even today in Iran shal refers to a variety of textiles. Janet deduces therefrom that the word shal, now shawl, perhaps came to Kashmir in the sixteenth century and was applied to the fine twill woven fabric from the underfleece of goats reared in Tibet. Right from the sixteenth to the nineteenth century Kashmir was the only place other than to a minor extent, Iran, whose weavers had the skill to fully develop the superbly soft and delicate fibre known as pashm or under fleece of goats. From a fabric to a specifically designed shoulder mantle the word shawl transformed into its latter meaning only when this mantle became popular as an exotic item of ladies wear in Europe.