Partition and the Dalit Question 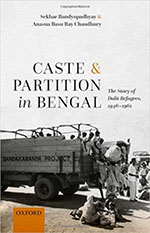 For a long time the Partition of Bengal in 1947 and its manifold complexities and consequences failed to emerge as a subject of serious academic research, and more so in the English writing-speaking world. The reasons behind the relatively (as compared to Punjab) subdued academic attention and consequent paucity of published works on the Bengal Partition were many, ranging from ideological-political differences (among both state and non-state actors/researchers) to the ‘perception’ that the Bengali Partition experience was far less violent and traumatic as compared to Punjab. It was only in the 1990s that we see an array of writings on the Bengal Partition experience, like Prafulla Chakrabarti’s The Marginal Men (1990), Joya Chatterji’s Bengal Divided (1994), Dipesh Chakrabarty’s Remembered Villages (1996), Ranabir Samaddar’s Reflections on Partition in the East (1997), and so forth. While the visibility of Bengal in Partition historiography improved since the 1990s, yet, at the same time, certain critical gaps came to be discovered in the otherwise well-researched and fast-growing historical representations.