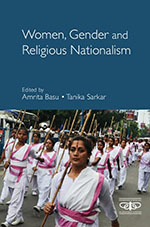 Decentring the gender discourse has emerged as a vital task for those seeking to understand the unprecedented expansion of Hindutva politics and the social and political ground it has gained since the erstwhile Jan Sangh won just two seats in the Indian Parliament in the year 1982. To dismiss the ‘gender’ of the political formation as conservative could be superficial, pernicious or simply convenient; a closer and more incisive examination of the women of Hindutva remains the need of the hour, to use a cliché. The book under review attempts exactly that by addressing themes like changing modalities of Hindu nationalist organizing, gendered techniques of mobilization, women’s militancy, and refashioning gender and sexuality. The book is part of the pathbreaking ‘Metamorphoses of the Political: Multidisciplinary Approaches’ series published under the aegis of the collaboration between Cambridge University Press and the MS Merian—R Tagore International Centre of Advanced Studies (ICAS:MP), which seeks to examine the conceptualization, articulation, and transformation of the political, particularly in specific arenas of contestation during the ‘long twentieth century’.