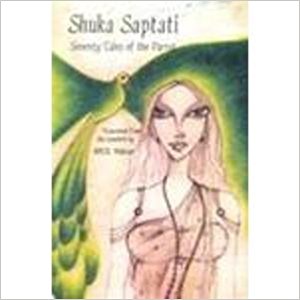 What a delightful collection of stories—all about women who take lovers, cuckold their husbands, have a great time and mostly, live to tell the tale. Or rather, in this case, have their tale told. We might think that this is surely a male fantasy, this world full of libidinous, licentious women. But that couldn’t possibly be as it is the men that are regularly humiliated in these stories. What fun it would be to imagine this text as a woman’s utopia, where we get to do what we want and do it when we want to. But that cannot be, either. For the frame that holds these stories within itself is a frame about the importance of conjugal fidelity, of staying within the bounds of marriage. It is precisely about not doing what we want even when we are sorely tempted and have the chance.

A young woman’s merchant husband is away on business and in his absence, she is encouraged by her girl friends to take a lover, for youth and beauty are but fleeting. She is inclined to do so, but a clever parrot detains her every night with a story about faithless wives. Like Scheherazade’s, the parrot’s tales are told through the dangerous and seductive night. They not only hold the listener’s interest, but end up ‘reforming’ the listener—the murderous Shahryar gives up his nasty habit of bedding and then beheading a virgin every night after being spellbound by Scheherazade for a thousand and one nights and our heroine, Prabhavati, stays home for a mere seventy nights and waits for her husband’s return, her virtue intact, her character improved and now unimpeachable.

Compiled in the 12th century, Shuka Saptati belongs to the vast body of Sanskrit Katha literature, a literature that stands in firm and proud opposition to the more valorized philosophical, religious and courtly texts of poetry and drama that exist in the same language. A.N.D. Haksar, who translates the present volume, has straddled the various genres of Sanskrit literature in his translations. He does a reasonable job of bringing these turbulent tales of betrayal and occasional retribution to the contemporary reader. Haksar catches the sanctimonious tone of the parrot as well as careless freedom of the wanton wives in his English rendering, though every now and then, his idiom is a little archaic. However, that takes nothing away from the basic elegance of this offering.

There is a riotous freedom to katha literature—anything is possible in this pluralistic universe where very little is sacred and everything can be mocked. These are primarily travellers’ tales, open to adventure and new ideas, unbound by moral judgements and driven by the pursuit of wealth and pleasure, free from the agonies of the epics, the stylized conventions of drama and the convolutions of philosophy. Apart from the Panchatantra, Katha stories tend to be strongly rooted in the city, a teeming, writhing metropolis, full of rogues and charlatans and courtesans and gamblers. Kings rule in the city, upholding a tenuous order, and bandits lurk in the forests, promising all kinds of chaos. Caste appears as a neutral descriptor here, like saying someone has almond eyes or luscious hips or a hooked nose. Brahmins and merchants and monks are equally wise or foolish, equally greedy or noble. As are women—they are smart and funny and avaricious and noble and deceitful and honourable in equal measure, just like everyone else.

Quite honestly, it is not the men in any of these stories that hold our attention, it is the women. For all that they are sometimes unfaithful to their husbands, they are also clever and quick and determined. While the Saptati focuses entirely on tales of infidelity because of it’s ultimately cautionary outer frame, the Kathasaritsagara, the grandest of the Katha compendia, is far richer and more nuanced in its portrayal of women. There, we meet the virtuous and very ingenious Upakosa who manages to lock her unwanted suitors in a trunk and safeguard her wifely virtue. Kirtisena outwits her crafty mother-in-law and multiplies her husband’s wealth. Rupinika, the courtesan, falls in love and gives up her profession and there are gracious bawds who teach young men how to protect themselves against (more) unscrupulous women.

There is a school of thought which holds that these are fundamentally misogynist texts because of the way in which they depict women. Under no circumstances are women to be trusted. Basically and most simply, they are to be either shunned entirely or suitablycontained. I think it would be worth it to make a distinction between the open and liberal universe that the stories inhabit and the rather more constricting frames that eventually moralize the stories themselves. While we know the framed narrative to be an integral feature of Indian story telling (whence it spread westward, carrying its specific tales along with it), we need to also remember that the stories that are brought together in these framed collections (like the Saptati or the Vikrama-Vetala cycles) were in common circulation and are far older than the texts (like the Dasakumaracarita or the Kathasaritsagara) that have gathered them together and from which we now know them.

The misogynistic impulse lies not in the tales themselves but in the frames that are placed around them. Perhaps it would be more accurate to speak of the frames as being patriarchal, which means that they embrace misogyny and imply a host of other equally unpleasant demons as well. Once we have acknowledged the politics and worldview of the frames, I would suggest that we are free to ignore them, to strip them of their containing powers. Since it is only the Vikrama-Vetala cycle that has a truly compelling frame, we lose very little by removing the boundaries that reduce these stories to powerful instruments of moral coercion. In fact, we can take inspiration from the subversive women in the stories who accrue power to themselves through their acts of defiance against the restrictions placed on their lives and persons. We, too, can go against the grain when we read these texts and rejoice not in the censure that keeps these women confined, but in their multiply expressed freedoms to chase the same goals as men—artha and kama.