Between Birth and Death 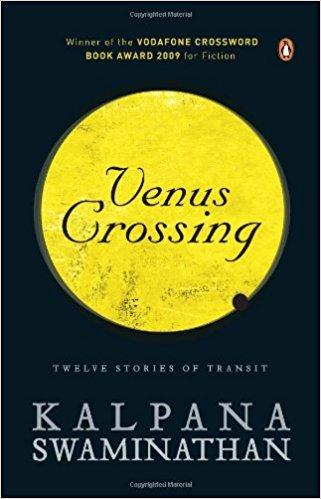 Kalpana Swaminathan is a surgeon writer, and the influence of her profession is evident in the choice of her themes in Venus Crossing: Twelve Stories in Transit. Swaminathan co-relates the physical states of fatigue, terminal illness, decay and death with the corresponding states of mind of her protagonists. The narratives are chiefly located in Mumbai city, and the daily commute by the local electric train is an integral part of the lives of her lower and middle-class protagonists, who must grapple with survival tactics in an impassive city. Some succeed, while others fail.

In the opening story ‘Sister Thomas and Mister Gomes’, Sister Elsamma Thomas has worked for the last 15 years in Ward 14, meant for terminally ill patients. Sister Elsamma develops a strange intimacy with Mister ‘NOSURNAME’ Gomes whom she knows will die soon. In ‘A Prostitute’, Shubhada is accused of being an ‘emotional prostitute’, and of ‘giving herself in homeopathic doses to anyone who asks’ (p. 3).

Stung by this comment, she remains a mute witness to an incident where a schoolboy dies falling from a train. In ‘Fly Away Peter’, Kashmira’s failed love story is related to us by her fellow commuter Anandi. ‘Euthanasia’ is a tale of a failed marriage and a pact between a wife, her alcoholic husband, and his friend to facilitate the husband’s death. It ends with an unexpected twist. ‘Eclipse’ is a disturbing account of female feticide related to us by the young girl-child narrator Champa. Champa unknowingly accompanies the midwife Dropdiben, who tips a bag with a female fetus from a running train into Mahim creek. Dropdiben then goes on to kill Champa’s new born baby sister who is born with a cleft. Having committed the act, she wins the gratitude of the male members of Champa’s family. Champa recounts: ‘When Dropdiben carried the gift in to Father and grandfather I heard her say: “All is at peace now. It was for the best”’ (p. 174). In the last story in the collection, ‘Yellow Dupatta’, Doctor Aparna helps a poor couple (Masuma and Hamid), to surreptitiously transport the dead body of a child on its final journey back to the village. The story ends with the poignant image of a resilient Masuma sitting on the floor of a speeding train: ‘People push past Masuma on their way to the toilet but she endures there, a milestone in the flux of speed. With death against her knees, she is crouched like a foetus, in a curve of renewal. Her hands move
lightly across her burden, her chin rests against the bunch in the yellow dupatta’ (p. 244).

Swaminathan is able to sustain a somber and often morbid effect through the use of unusual metaphors, and odd turns of phrases. Take for example, the description of Sister Elsamma’s Ward 14:

Forest of drip-stands branching with tubes that dangle plastic fruit, here, where one expects repose, there is a frantic burrowing of life being lived. There is a sense of time contracting. An imminence of departure . . .. This is a place meant for the inoperable, the surgical rejects, the palliated, the ostomized, the tube-fed and the tube- drained. (p. 3) The Chronics.

‘Euthanasia’ begins with a near erotic description of a used lipstick tube: ‘Lipstick shrugged lazily out of its dull carriage, rich and moist dark as a silver grape, a thick round stick sullen with juice’ (p. 44). The wife in this story uses differently colored lipsticks to express her emotions. On a shopping spree:She bought a peach lipstick, a shade she’d never dared, but which blended well with the milky cocoa of her skin. Then she grew extravagant and chose a deep orange, sulky ember in a cup of gold. When she was leaving with her purchases, she saw, impossibly, a stick of velvet blue, thick as midnight. She thought she might wear that with a dust-
ing of silver stars one night in white chiffon. (p. 60)

One wishes however that Swaminathan had refrained from using words that are beyond normal comprehension (‘the pitiless glare of her own pulchritude’, ‘concatenating like events’, ‘cochleate emptiness’ etc) as this hinders the pace of her otherwise engaging stories. The prelude (‘8th June 2004’) is also very heavy on symbolism and in keeping with the clinical precision with which she executes the rest of the stories.Interesting though these stories may be, Venus Crossing is not a book one should pick up for mere recreational purposes. Rather Swaminathan’s work would appeal more to someone who wishes to delve deeper into philosophical considerations of that state of ‘transit’ between birth and death that defines human existence.