Gender and the Agrarian Landscape 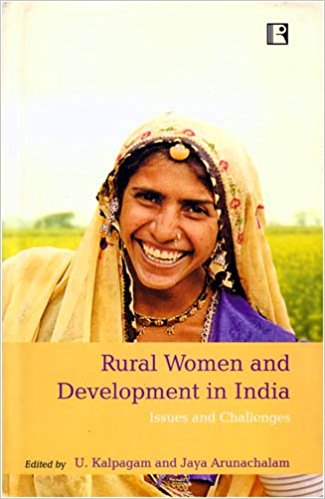 Gender and the Agrarian Landscape
Paramjit S. Judge
RURAL WOMEN AND DEVELOPMENT IN INDIA: ISSUES AND CHALLENGES by U Kalpagam Rawat Publications, 2010, 284 pp., 650
June 2010, volume 34, No 6

Examination of the rural women of India implicates lot of things the foremost among which is that we are covering an overwhelming majority of women in the country. We are moving away from the metropolitan shining face of the woman which is creating hegemonic discourse on defining femininity, feminism and making an attempt at reorienting the male gaze through articulation and assertion. All these issues do not dominate and primarily concern the rural-agrarian landscape. Issues that concern a large number of rural women are water, food and work. Over and above these issues is the matter of land rights around which patriarchy has been built. Villages are more idealized in literature and impressionistic than they really are. A village is a repository of the caste system in its crudest sense of the term. People do not cover the caste-based discrimination under the garb of ideology.

That is why Ambedkar told his followers to leave the villages and live in cities. Only Gandhi in the 1940s tried to imagine village as a possible social space where all evils would disappear. Despite the fast growing cities, there is no real dent in the size of India’s rural population. The volume under review takes cognizance of rural women and development in India. Twelve articles included in the volume take stock of different dimensions of
women’s life in the villages of the country. Most of the contributors are well-known women social scientists in their own fields and the contributions cover most of the regions of India.

The editors have given an impressive introduction to the volume touching upon all issues covered in various articles. These are: access to resources, food security, livelihood security, micro-credit challenges, violence and rural women’s freedom, and challenges of empowerment. Imagining the village without land is impossible and thus landownership is the foremost component of the definition of the village. K. Sardamoni has taken up the issue of right to land, food and food production in the context of Kerala in the first article of the volume. She has pointed out how among certain matrilineal families women enjoyed rights over land and food production, which began to erode after the powerful impact of British rule when the new land system was introduced in Kerala. Over a period of time, the women in Kerala lost the privilege of having land rights. Towards the end of the article, Saradamoni takes up the issue of food security and examines the effectiveness of the UN’s role in this regard. Despite the historical analysis of the issue of land and food rights, there is a degree of vagueness in the concluding part of the article.

Ilina Sen’s article on the women of Chhattisgarh is interesting and is about the way monoculture in agriculture is taking away women’s knowledge and skill. The state and commercial intervention have endangered the self-sustaining forest communities which were not familiar with ‘stark hunger and severe malnutrition’. Sen argues for community-based rather than state-based structures among these communities. The important issue that this article raises is that women are the repository of agricultural diversity. Traditional social science view regards women as the storehouse of culture. It shows how the view that there is something like sex-based division of social formations and practices is wrong. Joy Deshmukh-Ranadive’s theoretical explorations regarding gender and right to food are more of an empirical exploration. However, one finds it difficult to understand the following observation: ‘It has been seen that within a rights discourse, the responsibility for food reaching people and vice versa, rests with the state. However in the dynamics of everyday life within a capitalist system, people have a responsibility to feed themselves and their families’ (p. 65). We do not know what kind of theoretical exploration has led to this general observation. Such kind of comment could only be used as a normative position within the framework of neo-liberal ideology.

There are two articles related to water management and gender concerns. Jayshree Soni, without making the development process responsible for water scarcity in Gujarat, takes stock of eight villages in four districts by collecting data through interviews. She raises an interesting point when she writes, ‘Instead of people’s participation, the expectation of state intervention in water management added to the hardships for women, particularly those belonging to socio-economically backward category’ (p. 102). Seema Kulkarni, on the other hand, argues for better governance in the water sector.

Smita Tewari Jassal’s article takes cognizance of the delinking of caste from the traditional occupation as a result of which certain castes are facing problems of livelihood. The case of ‘Mallah marginalisation’ is an interesting illustration of how in the face of disappearing caste occupation the Mallah women have begun cultivation of diara land—the land that emerges after rains in the Ganga River. It is interesting to note that secondary occupations have acquired greater significance and women have taken over the economic activity thereby relieving men for casual work. The article on microfinance by Chhaya Datar and Priya Pawar brings out the typical story of rural women. Microfinance in India has gone into the wrong hands and it has joined the ranks of all those activities which are carried out in the name of development by the carpetbaggers in confluence with the bureaucrats and politicians. Most of it is much ado about nothing. Kumud Sharma’s article on microcredit in relation to women’s empowerment and poverty reduction through the self-help groups is the same story and comes out with no different conclusions. The success of microfinance in Bangladesh should not be taken as the basis of success in India. One of the major problems in India is that all kinds of vested interests join hands to make hay while the sun shines. The result is always disastrous for the people for whom such programmes are chalked out.

The article that requires special mention is on love and freedom in Uttar Pradesh written by U. Kalpagam. Despite the fact that the author shifts the focus of analysis towards the end to the case studies of women who are living in families and voicing their opinion about love and freedom, the article is refreshing. One gets the satisfaction of finding something new about women’s issues that draws our immediate attention. In the case of urban women the issues of sexuality, woman’s body and belonging, sexual preferences and assertion of lesbian identity are fast becoming visible. In the western world most of the issues have been debated after Foucault’s work on sexuality. Such issues are not debated by the use of empirical and historical data in India. Rural women, on the other hand, are not on the mental map of the social scientists on the issue related to sexuality, as if they do not love and have no desire. The development process has thrown people out of their caste cocoons and young people fall in love without bothering about caste. Marriage brings with it heavy pressure of society on these young couples. Sometimes they are killed by the family of the girl or they commit suicide. In fact the problem is not confined to Uttar Pradesh. It has taken the form of Khap Panchayats’ decisions to punish the wrong doers in Haryana. In Punjab the cases of honour killings have gone up recently. Kalpagam has provided cases of many Hindu and Muslim girls who have chosen to conform to the norms and traditions instead of going against the wishes of the parents. It can thus be concluded that to marry outside of one’s caste by choice requires tremendous courage of conviction. The most notable aspect of the study is that as a result of rising demand for dowry, problems in finding grooms for girls have emerged as a significant factor. The rise in the cases of death as the result of love marriage may be seen in the light of the tenacity with which these families are holding on to the traditional values.

Kumud Sharma has made an attempt to re-negotiate power and spaces in the context of rural women’s engagement with the politics of development. She does not offer any fresh perspective except for the idea of participatory development, training and capacity building. However, these things do not work in a textbook fashion. There is something missing in the case of women of rural India. The contributions seem to have inadvertently missed the heterogeneous character of the rural women. A strategy works for only the homogeneous populations, but with the increase in heterogeneity development need undergoes a change. However, the volume would be of immense help to the young researchers working in the area of gender and development.