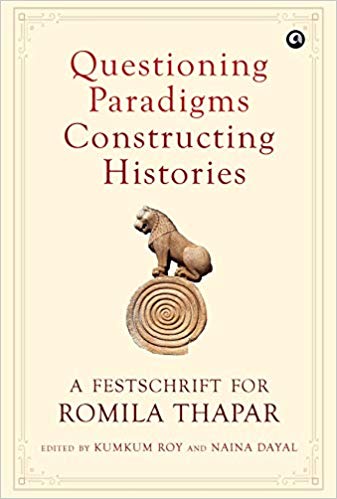 Valiant efforts by many authors and discussants, by two skilled editors, and by committed publishers produced this remarkable volume in record time. Based on a conference conceived in 2017 and held in 2018, under the auspices of The Book Review Literary Trust, this large volume honours Romila Thapar and continues her work in a spirit that she expressed in the quote which appeared on conference bags, excerpted on the book jacket: ‘As a historian, I am aware that I too am part of the historical process, as we all are, and that the paradigm will shift in the future …’ The editors introduce the volume by succinctly summarizing each of twenty-seven tightly written erudite chapters, composed by scholars ranging across such a diversity of specialized fields of historical research that I doubt they would ever have joined forces for any other project.

Each chapter considers themes in Romila Thapar’s expansive work, which crosses boundaries among political, economic, social, and cultural history; and, though she has focused empirically on ancient and early medieval India, she has also broadly engaged in global debates in history and social theory, technical and theoretical advances in relevant fields,