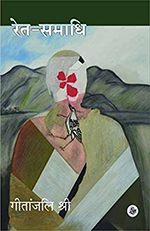 As a fellow writer, the fifth novel of Geetanjali Shree leaves you wonderstruck with its sweeping imagination and the sheer power of language, unprecedented and uninhibited. She is known for her experiments with content and form, but this novel keeps you in grips with its storyline as well, which had not really been her forte earlier.

To narrate a bit of the first part of the story, the 80-odd years old mother has turned her back on the world after being widowed. The family keeps cajoling her to come out of this and it unfolds the familiar saga of a doting son, a somewhat recalcitrant daughter-in-law and a daughter, who with her rebellious lifestyle is not on speaking terms with the disapproving brother. This is the first part of the novel, but this story has been told with thousands of fine nuances of relationships and in a language that is coined and minted anew to express it. It is a language in which probably we speak inside us, a continuous chatter without any punctuations as such. In a written form, it acquires a rhythm of its own, at times the abundant synonyms including words and sounds unheard of, yet fitting seamlessly. Of course, one is left gasping at the rich vocabulary the writer has access to and her recklessness in effectively inventing a language of her own.

The craft of storytelling is verily discussed throughout the novel and there are many narrating voices, at times a bit confusing. Even crows become narrators: at times to display the knowledge of saris and at other times to acknowledge their power over borders dividing men. The names of previous and contemporary authors come as they do, in whichever way they are relevant to the text. This playfulness within the story might be exhilarating or exasperating as it is, depending on the mood and propensity of the reader. This reader found herself waiting to go back to the text all day, though leaving the book at times to wonder what it takes to write a book like this. One is pretty sure that the author too has left the book many times and picked it up to start anew, waiting for another mood to set in. This is a book to be read in many sittings, and craving to go back to it. The details of thoughts and emotions as well as settings weave a magic one cannot easily shake off.

To come back to the storyline, the first part ends with the old mother turning her back to face life again and distributing all her stuff to one and all in the neighbourhood. She also disappears one day for more than 24 hours and is found after great agony for the caring family and now comes to stay with her daughter. The second part is a great saga of the love of a daughter for her mother. It is as if the book possesses you second by second of how her care brings back the old woman to life.