Of Words and Worlds 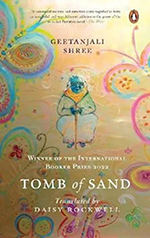 Reading Ret Samadhi and Tomb of Sand is exhilarating, challenging, even exasperating; such is its span and scope, its playful exuberance and idiosyncratic originality of style, playing out differently in the two versions. Given its more recent American/English avatar, one may evoke Whitman: it is vast, it contains multitudes. Given its incontrovertible rootedness in its Indian-subcontinental milieu, however, one must invoke the Mahabharata, the grand epic that it references at the very outset. The north Indian joint family is an institution that frames the narrative, with all its garrulousness and warmth, its politics and piques. But true to the epic analogy, it also stretches, through an exercise of a capacious, liberating imagination, the narrow meaning of family to include in its sensuous, joyful, wise, witty, and compassionate embrace, a larger human and non-human world, crossing all manner of borders and boundaries. It is easy to see how diverse traditions of storytelling—the Mahabharata, the Panchatantra, and qissagoi—animate the narrative with its mix of rambling family saga, a late-life female bildungsroman, scathing satire, literary/philosophical meditation, magic realism. In this hold-all of a novel—and this homely analogy from an older India is quite as apposite as any avant-garde literary referent for a novel that immerses one in the cacophony that a postcolonial India simultaneously inhabits—words and worlds collide, sing, and dance, sliding from and looping upon themselves and defying any effort, any plot, to move swiftly, efficiently, predictably from point A to point B. This digressive, recursive strain, when accompanied by a range of linguistic registers, can also strain the eye and mind expecting a quick read or sparse prose. Given enough time and leisure, it performs the deepest purpose of art: to delight and to illuminate.

Indeed, the novel demands leisure and effort in equal parts; it would settle for nothing less. It wishes to slow us down to savour its peculiar rasa: the earthiness of the soil, the flavour of gali-koocha, the intimate, winding by lanes of life vividly observed, casually interspersed with philosophical and literary musings and self-delighting flights of fancy. Its stream of consciousness, as the liquid metaphor more befits its fluidity, seeks to stir the stagnant air, birthing numinous butterflies with its word-wands, leela given full play. Incidentally, birds and butterflies and wands are ‘characters’ in this suprahuman and yet all-too-human novel, at its heart the octogenarian Amma/Daadi, her biological and extended family, including the ‘servant class’ who mill around her, and a sparkling transgender character who embodies transgressiveness itself. In this novel of many transgressions, the novelty in the genre’s very name comes alive, returning it to its etymological roots even as it opens new windows and doors, breaching walls.

To respond to the book, its speeches and silences, is to start at the beginning, with the title, which calls attention to itself, not least in the translation from Ret Samadhi to Tomb of Sand, which to this reader, at least, seemed odd at the very outset.