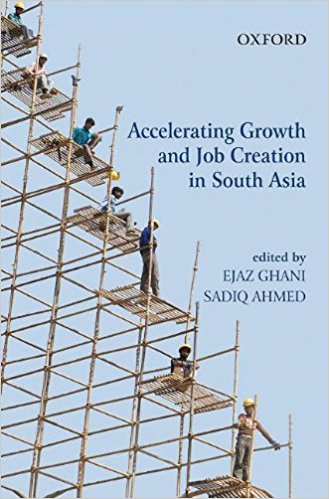 This volume is the outcome of a regional conference, called the Second SAARC Business Conclave that brought together a number
of key players from the private sector, policy makers, and academics who expressed hope that if the reform processes are in place, South Asia has the potential to achieve and sustain higher growth. The growth practitioners and policy makers identified five key drivers of growth: expanding industrial base, modernizing the services sector, strengthening the skills, strengthening institutions, and regional cooperation for boosting trade and infrastructure investment. Based on the above, the book is along three themes: an overview of South Asia’s growth opportunities and challenges; sources of growth and policies; and the role of regional cooperation in promoting growth. Despite diversity, each chapter emphasizes issues of growth and employment.

Even as late as the beginning of 1980s, South Asia was characterized as a region that was slow growing, autarkic, and with widespread poverty. Today South Asia is drawing widespread attention as demonstrating rapid growth and substantial poverty reduction. Even so, this region is home for the largest number of poor in the world and is also characterized as being the least integrated. Large disparities within and between countries remain. In a preface to the book, the co-editors, Ejaz Ghani and Sadiq Ahmed point to an emerging consensus that this growth should be more inclusive to address the dichotomy of the two faces of South Asia resulting from the growing gap between leading and lagging regions. Recent data released by Central Statistical Organization however reveals that this disparity between the co called ‘bimaru’ (lagging) states and the rest of India has been receding. Between 2000–01 to 2008–09 the largest gains were made by Bihar, Madhya Pradesh, Rajasthan and UP in that order. Bihar in fact, recorded the maximum growth rate of 11.44 per cent in 2008–09. This shows how good governance, and improved law and order situation can attract investment and accelerate growth rate even in most backward states.