On Memory and History 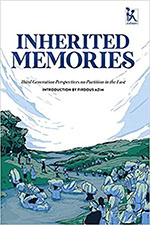 In the last decade, there has been a palpable shift in discussions around the 1947 Partition of India and Pakistan. Renewed interest has inspired writers to conduct oral history interviews of people who lived through the period when borders were drawn to carve out the two dominions. The works of Devika Chawla, Anam Zakaria, Aanchal Malhotra, and Kavita Puri are cases in point.[1] All of them, however, primarily concentrate on the first-hand accounts of survivors, depicting their experiences of dispossession, migration, and resettlement. Inherited Memories: Third Generation Perspectives on Partition in the East extends the domain of Partition and oral history by focusing on how memories of the bifurcation are embedded in the collective consciousness of individuals whose grandparents crossed the international borders. In doing so, it attempts to understand, what Friso Maecker in the Preface calls, ‘the culture of remembering’ that encompasses the Partition in West Bengal and Bangladesh (formerly, East Pakistan).

Partition, as it unfolded in the East, had been a protracted affair. Within twenty-four years after its formation, Pakistan was partitioned again, and it resulted in the liberation of Bangladesh. Against this backdrop, the ‘Bihari’ emerged as a contentious figure. In the Introduction to the book, Firdous Azim rightly points out that Bihari denotes a linguistic category rather than a geographical marker for those who came to erstwhile East Pakistan in the wake of Partition. One of the interviewees, Dolly Akter, narrates that the Urdu-speaking community or the Bihari was accused of being razakars–a term used to identify those who favoured West Pakistan and were hostile towards the Bengali-speaking Muslims and Hindus in the months leading up to the 1971 Liberation War. Though Dolly’s grandfather was not involved in politics, her family had to bear the brunt of the war. Her grandparents shifted to a camp that sheltered the Biharis. Since they could secure the ‘red card’, the newly formed Government of Bangladesh offered them land to resettle. Dolly testifies that government officials provided no compensation to those who failed to procure the card.