Afghanistan: Caught in the Quagmire of History 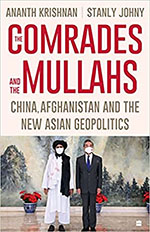 Afghanistan: Caught in the Quagmire of History
Gunjan Singh
THE COMRADES AND THE MULLAHS: CHINA, AFGHANISTAN AND THE NEW ASIAN GEOPOLITICS by Ananth Krishnan HarperCollins India, 2022, 304 pp., 599.00
September 2022, volume 46, No 9

The book under review is a crisp and succinct summary of the developments in the region. It covers the historical background of the situation and developments. It discusses and analyses them  in a beautifully told narrative and juxtaposes the developments in Afghanistan, Pakistan, India, China and the US brilliantly to build a base for the arguments. The book is a timely and important addition to the already existing corpus  of literature on the discussed topic. It doesn’t matter if you are a scholar or a student, the book is a must read. Though it doesn’t provide you with a lot of new information, what it does is to deliver the existing information in a coherent and logical fashion. It also does connect the dots on why and how things happened in Afghanistan.The developments in Afghanistan are not limited to Afghanistan only. Domestic challenges and politics of the United States, Pakistan and China all play a crucial role in how they look at Afghanistan and how they interact with it. The book summarizes these very challenges and developments.

For the United States the war in Afghanistan was not panning out as it would have expected. It was proving to be a drain on resources and the mounting human loss was not going down well with the American public, especially after the killing of Osama bin Laden. To add to this, the rise of China as a potential challenger to the unipolar world order is also an important geopolitical concern for the United States.