On a Wide Canvas 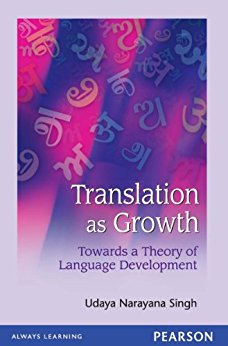 On a Wide Canvas
N. Kamala
TRANSLATION AS GROWTH:TOWARDS A THEORY OF LANGUAGE DEVELOPMENT by Udaya Narayana Singh Pearson, 2010, 230 pp., price not stated.
October 2010, volume 34, No 10

Explaining his location clearly as writer, translator, and linguist, the author Professor U.N. Singh paints a wide canvas on translation as an instrument of language growth. A growth that is essential to make languages ‘modern’, ‘a step which makes a given speech capable of being used in a much larger number of domains and in many manifestations’ (p. 183). He emphasizes that earlier languages could grow at their own sweet pace, while modern reality would have languages develop more quickly in a planned manner with two options open to humanity—innovation or translation. The latter is according to him the safer bet for language growth as most innovations are a bit ‘risky’. His own location helps him look at the activity of translation in a three pronged manner though with a definite emphasis on his linguistic background. As a polyglot linguist he is privileged to be able to read, translate and quote from texts and translations from Bangla, Hindi, Maithili, Telugu and, not to forget, English.

Surveying western theory and detailing elements of James S. Holmes’s map of the discipline of Translation Studies, though he doesn’t quote him, U.N. Singh touches on all major western theorists in literary and linguistic domains, and a few in TS itself. He compares and contrasts them with Indian theorists and litterateurs when he talks of ‘transcreation’, a term much used by Professor P. Lal, and uttar-aadhunikataa, BhaaSaa texts and the distinction between sangskrti and prakrti, to cite but a few instances.