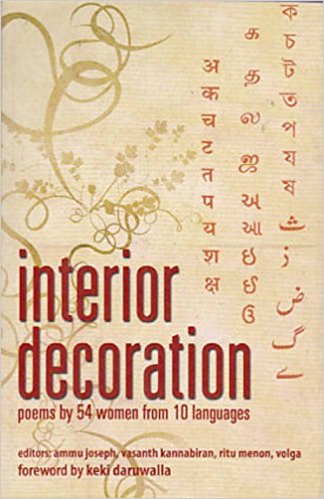 A woman is a thing apart.She is bracketed off, aComma, semicolon, at mostA lower case letter, lostthe literary circus.………… but when she speaksHer poems bite, ferocious. (p. 102)

If you disagree with this view of Rukmini Bhaya Nair, this anthology can perhaps convince you to change your views about women’s writings. It is an outcome of a series of workshops organized between 1999 and 2006 by Women’s WORLD (India), a network of writers, critics and editors, and attended by 200 women writers in ten major regional languages of India. Earlier a similar workshop organized by Asmita in 1994 had resulted in another landmark anthology of Telugu poetry by women titled Neeli Meghalu. Like Neeli Meghalu and all similar earlier anthologies, Interior Decoration takes us directly into the centre of a familiar debate i.e.

concerning the distinguishing features of women’s writings, the problematics of homogenizing writings by women belonging to different castes, classes and religious communities, the issues of subalternity, nature of censorship that such writings have been subjected to and the oppositional aesthetics which characterizes these voices of resistance surging forth at the margins of patriarchy. When Susie Tharu and K. Lalitha published their iconic twin volume anthology Women Writing in India in 1991, outlining their objectives they commented, ‘We began work on these volumes with the premise that critical assumptions, historical circumstance, and ideologies generally have been hostile to women’s literary production and have crippled our ability to read and appreciate their work’ (p. xvii). The editors of the present anthology resonate Tharu and K. Lalitha when they write, ‘We wished to explore the idea that gender-based censorship, embedded in a range of social and cultural mechanisms that invalidate women’s experience and exclude them from political discourse, is often far more pervasive and far more difficult to confront than official suppression…’ (p. 11).