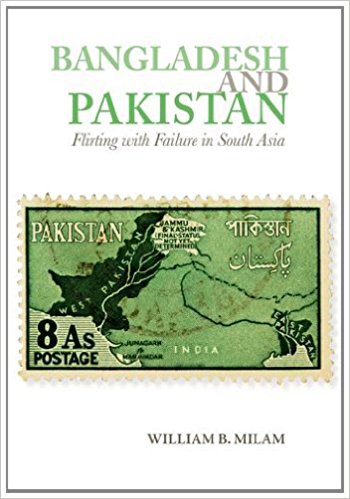 Bangladesh and Pakistan:Flirting with Failure in South Asia is essentially a political (and military) history of the two countries since 1971. Yet there is, notably in the case of Pakistan, sufficient recounting of the past to make the present more comprehensible. William Milam was the US Ambassador to Dhaka when public agitation forced General Ershad to step down in 1990 and the restoration of democracy followed. He found himself representing Washington in Islamabad a few years later when another General Pervez Musharraf dismissed the civilian government to start another decade of military or quasi-military rule. Milam thus had a ringside view of two significant developments in India’s neighbourhood. In the Preface, the author describes his effort as an interpretative book on Bangladesh and Pakistan based on his own experience adding that ‘economic and social developments feature only briefly’. This is only partially true, as the author’s probing into history and the stimuli that motivate the countries do indeed reflect social and economic issues in the broader sense.

Bangladesh and Pakistan is in fact two books rolled into one. Besides their common origin in 1947 and uncomfortable cohabitation for the next twenty-four years, they have been on different trajectories. Though the praetorian attitudes inculcated in the Pakistan days may have motivated military interventions in Bangladesh in earlier years, January 11, 2007, was in a different category following a collapse of the political system and the military having vindicated itself by the elections, even as there would be a message to future civilian governments that some of their past errors should not be repeated. The long-lasting takeovers by Generals Ayub, Zia ul Haq and Musharraf had no legitimate excuse.

Milam demonstrates a rare understanding of the origins of Pakistan, not too often seen even in India with its Punjab or UP-Muslim-centric analyses or understanding. He refers to the critical importance of the Muslim League electoral victory in Bengal as contributing to the creation of Pakistan when the inclusive Unionists were in power in Punjab and Sindh. It was so late in the day that even the North West Frontier Province had to determine its future through a referendum. Even in Bengal, he points out, the Bengali-speaking Muslim Leaguers may have been happier with an undivided Bengal (which is why Jinnah had appointed non-Bengali speaking leaders to head the Muslim League administration). Milam also points out the tight-rope walking of Jinnah in selling the idea of Pakistan to disparate groups. It was to be the home to South Asian Muslims. But was it? In the author’s words, Jinnah knew the importance of ‘. . . a delicate balance between the interests of the majority and the minority Muslims, and a studied and creative ambiguity about the objectives of the League and the nature of a Pakistani state’. This ‘creative ambiguity’ may have elicited support for the creation of Pakistan, but did not assist in the establishment of a clearly defined sense of nationhood. (This was realized early enough by the ‘minority’ Muslims. As Choudhry Khaliquzzaman relates poignantly in Pathway to Pakistan, when asked on the eve of his departure for Karachi in August 1947 what would happen to those he left behind, Jinnah silently left the room).