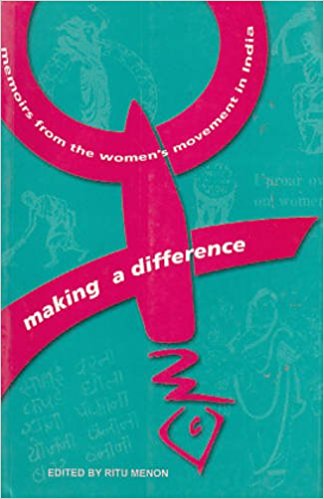 When one considers the fact that the autobiography or memoir as a literary form is predicated upon the sense of an individuated self that emerged with modernity, one must wonder, is ‘feminist memoir’ a contradiction in terms? At one level, perhaps not, because feminism is such a quintessentially modern philosophy; its ferocious critique directed precisely at modernity’s failure to deliver on its promise of the universal, emancipated individual. But at another level, there could be a contradiction, since like other modernist assertions such as from dalits and Marxists, the feminist claim to individual autonomy is accompanied by an insertion of the individual self back into a radically reconstituted or newly created community. The story of self-emergence then, is inextricably linked to narratives of other selves. This peculiarly other-directed sense of self may be what Sheba Chhachhi refers to in her largely pictorial essay in this volume, as ‘shared subjectivities’.

Another aspect of autobiography/memoir to which I would draw attention, has to do with its relationship to ‘truth’. The organizing of the innumerable details of one’s own life and that of others in one’s life, inevitably involves selectivity, and both the selection and chosen form of narrative, is preordained by the purpose behind the writing. Whether that purpose be exculpation, celebration, instruction, producing a modern ‘history’. Any of these (and many other possible) objectives would require its own particular kind of selection and organization of the literally innumerable ‘facts’ of one’s life into narratives. And thus it is that eventually, autobiographies/memoirs ‘tell the truth, but tell it slant’, to misappropriate Emily Dickinson (as her own intention with this admonition was less to question truth, than to save humanity from being blinded by its dazzling light!)