An Absent Presence: Tracing the Difference 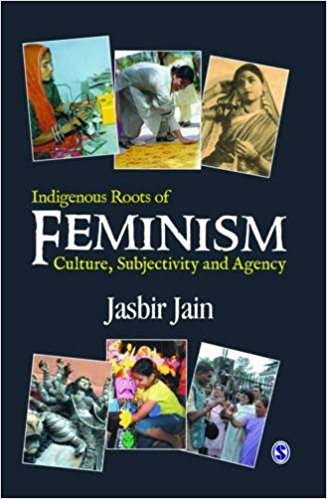 Every author needs a defining moment to get started on the long, arduous path towards writing that next book. And that cathartic moment came to Jasbir Jain while she was on a lecture tour in the US, talking extensively on ‘Women and History: Memory, Resistance and Agency’ when she suddenly realized that she needed to ‘fill in gaps’ in areas if she sought to locate the details for the sheer multiplicity of women’s issues. She knew too that unless she worked on that next book, the contours of issues would not emerge with contextual clarity. Roots of Feminism: Culture, Subjectivity and Agency, born out of that intensely introspective moment resonates with some telling observations and questions that you and I have always wanted to voice, but perhaps never quite found the nerve to do so.

The book with its exhaustive bibliography is immensely valuable not just for academic scholars and researchers, but for literary historians, culture critics, writers, artists and actors who wish to understand how, or why, the ‘Absent Presence’ of the past casts a long shadow to the present, and how women and their agency make a difference.

If I could be forgiven for referring first to the concluding chapter, ‘Tracing the Difference’, I wish to share with the reader Jain’s metaphor of tracing to understand the position she takes in this study. The very act of tracing has Derridean connections, says Jain, for ‘Semiology has lifted both “trace” and “difference” into a philosophical plane…one pointing to similarity, the other to difference.’

With this as her position, Jain assimilates the insights of religious history, sociology, psychology and other related disciplines, and works her way through her predominant methodology-the literary constructs in various genres that developed, or thinned out, or perished, or even rose into major movements. They cover a wide range-personal narratives, re-writings of epics that subverted the accepted message, diaries that lay

“how does she perceive her ‘self’ under all these layers? It has to come from the depth of her subjective consciousness. Jain refers to The Silken Swing, a joint study by Fernando Franco, Jyotsna Macwan and Suguna Ramanathan, who bring new findings from psychology to show how subjectivity can actually empower a woman despite the gap in her thought and action because it ‘alters the perspective that the person brings to bear upon the world’.”

buried in obscurity for a long time before they were published, the brilliant though anonymous Simantni Updesh (1882), written in Persianized Hindi by an obviously educated woman, the prolific poems of the Bhakti period, folk songs at harvest time or weddings where ‘women sing for themselves’, and films (the book has an incisive analysis of Nagesh Kukkunoor’s Dor from a feminist angle)-all of these are studied against their historic background as material that yield new insights. This extensively researched study is embellished with a variety of photographs and illustrations ranging from conventional pictures of Sita’s Swayamvaran, present day Ramlila processions to women protestors who confront the police with their raw energy amongst many others.

There are ‘multiple feminisms’ says, Jain. Given the diversity of their origins in localized social, cultural customs, traditions, religious practices, together with the ramifications of caste, economic status and the rural-urban divide, it calls for a deeper under-standing of the `absent presence’ of the past. ‘The issue of identity, subjecthood, space and freedom’ entails ‘a constant need to negotiate cultural myths’, says Jain, and ‘the wholeness of a women’s exis-tence would include her body, mind and soul and for that it has to interact with the notion of masculinity’.

Jain identifies three different kinds of agencies that were operative for the women’s movement-male intervention and desire for reform, government’s initiatives and legislation, and women themselves who got proactive. Jain’s insights correlate the information overload from myths, epics, and ancient texts such as Manusmriti and Natyashastra, alongside the social, political and religious movements.

Let us take the religious movement first. Jain’s comments on the Bhakti movement, and the so-called liberation of women who addressed their poems to God in ‘Getting Back to Men Through God’ provokes a wicked humour that is slumbering within even the most prayerful amongst us by the perspicacity of her remarks. Pointing to the self-delusion of women whose propensity to romanticize made even their God a lover-figure, Jain says ‘romance has acted as an enticing principle for female subordination’ and women ‘enslaved themselves to the idea of love’. How painfully true! This is perhaps the first time an Indian critic has come out with such a compelling remark on the Bhakti movement. Still, ironically, people unabashedly resorted to a gender switch whenever it called for an intensity of devotion from a bhakta. He simply took on a woman’s role to prove his total submission to God! As if the very act of submission, even to God, is an essentially feminine gesture. So it is that Bulle Shah, in a ‘mad frenzy of worship’ declared that he is Heer who is now submerged in Ranjha.  Jain aptly quotes A.K. Ramanujan who commented on this inverse tradition of male-becoming female: ‘One of the last things they overcame, in these traditions, is maleness itself’ (Talking to God).

The opening chapter takes up the patriarchal and religious structures that rendered women ‘invisible and silent’, perceiving them as ‘ahistoric and outside of time’. All the musty patriarchal notions of dharma and pativrata are ‘worked through exclusions and power’ says the author. The next chapter on the Epics shows there is always certain emancipation in the very act of writing. It takes a political will. To offset the valorized image of Sita in Ramayana, Jain cites Nabaneeta Dev Sen’s story ‘The Immortality Trap’ in which Rama blames Sita for the war with Lanka and Lakshmana’s alleged death, and remarks that while a wife can be replaced, a younger brother cannot be. Trijata, the female demon who is with Sita wonders whether Sita would like to return to that loveless marriage. She does return. Sen lets Valmiki comment: ‘Truly, how inscrutable is the character of woman!’ To which Narada replies: ‘Even after knowing that her life is joyless and hollow, she is lured into the trap of immortality. A woman too deludes herself.’ Jain calls it an utterly ‘hollow sense of honour’.

The chapter has interesting details from the Jain Ramayana, Sri Padma Purana, several articles and books. It mentions an interesting travel tour by writers to present-day Mithila, organized by the late Agyeya (Satchidananda Vatsyayan) that helps them discover the resentment of the local people about their ‘wronged daughter’. It mentions too Pratibha Ray’s powerful first person narration of Draupadi in Yajnaseni (1995) that captures the essence of this princess from Mahbharata who had the intellectual strength to question the moral order (or disorder) of her times. Draupadi continues to be one of the most disquieting icons for the thinking woman today. Reflecting on the life of Hansa Wadkar in, ‘Working Through Space: Patriarchy and Resistance’, Jain asks: ‘is women’s desire for domesticity a purely romantic wish?’ The numbing effect of domesticity is described wryly by Jain. Suvarn was ‘converted by her mother-in-law into becoming a good, silent daughter-in-law who was not to feel thirsty or hungry, not even to laugh or communicate’ (p. 199). Suvarn writes a book that her son laughs at. She makes a bonfire of the five hundred copies on the terrace. After such sense of futility, how does one ‘continue the act of living?’ Describing their soul-less deal in life, Jain remarks: ‘The beautiful, the aesthetic, the emotionally enriching was out of bounds for the respectable. Women were the greater losers as they were traditionally barred from learning.’

Manusmriti, we know, planted the most enduring anachronistic ideas in not just men, but also in women who are under their control. Pandita Ramabai, Tarabai Shinde, Meera Kosambi, Rasssundari Debi and several others made a big difference with their resistance discourse. The section ‘Outside the Confines’ gives a glimpse of women who function in public space as singers, dancers, and actors in theatre/films and some of their well-known autobiographies. Shyam Benegal based his film Bhumika, meaning The Role, on Hansa Wadkar’s autobiography with a riveting performance by the late Smita Patil.

‘The Nineteenth Century and After’ highlights the amazing fact that despite early marriages and little or no formal education, women made tireless efforts to educate themselves. Kailashbasini with her acerbic wit, Abanti Rao, Sarala Devi, Ashapurna Devi and many other women in this period wrote prolifically in magazines and newspapers, raising their voices against gender issues.

‘Why do women need to recover history or have a history?’ asks Jain in ‘Articulating the Self’, and answers, that it is ‘for overthrowing hegemonic structures.’ For this, a woman needs knowledge. To write her self is therefore very complex, not only for the dalit writer Bama or the bandit queen Phoolan Devi, but for several others. Urmila Pawar exposed the flaws in dalit masculinity, others spoke about rituals, exorcism and certain practices used to oppress and brand women, all of which, says Jain would ‘offer a rich material to the anthropologist’. Equally, women from the upper caste/class suffered by the subordinate position given in the religious order of their community. Salvaging her real `self’ from these tangled, socially, culturally imposed taboos was a big existential question for women.

So, how does she perceive her ‘self’ under all these layers? It has to come from the depth of her subjective consciousness. Jain refers to The Silken Swing, a joint study by Fernando Franco, Jyotsna Macwan and Suguna Ramanathan, who bring new findings from psychology to show how subjectivity can actually empower a woman despite the gap in her thought and action because ‘It alters the perspective that the person brings to bear upon the world’.

We remember these women with Jain’s telling words: ‘The struggles of ordinary women to find expression in the very ordinariness of life are evidence of the intense fire burning inside them’. Because, ‘these women have carried out lone battles which redefine an individual’s relationship with society as well as the concept of feminism.’