Love, Friendship and Sex: Knowing the Other 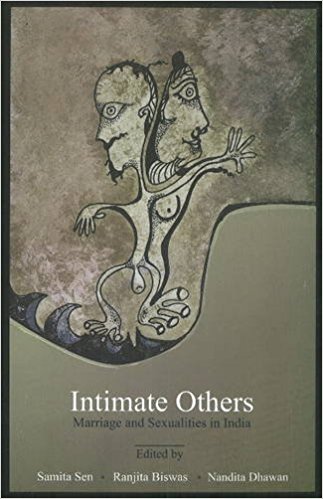 Intimate Others is a well-researched and well documented work produced by the Jadavpur Uiversity’s School of Women’s Studies. The School deserves to be congratulated for having motivated the contributors to bring together this volume on a subject on which very little has been written. Male sexuality has been discussed often enough; one immediately thinks of Sudhir Kakar’s two works: Inner World and Intimate Relations: Exploring Indian Sexuality but both project the male at the centre. Works on women’s perspectives are rare. Feminist scholarship in India concentrates largely on caste, economics or religion. One could mention Uma Chakravarti’s Gendering Caste and the Kali for Women series on feminism.. There are others focusing on the social problems of the girl-child, the dalit, or the Muslim woman. SNDT Women’s Studies Centre has produced a number of such useful studies. The present collection goes further than them, primarily because it takes up marriage as a social institution and explores it in different contexts. It recognizes the multiple garbs that marriage dons ranging from romance, love, oppression, polygamy to simply a sex relation-ship, working both within normative patterns and outside them.

The seventeen essays divided into four sections are introduced by the editors locating them in our times. The three essays in the first section provide a historical perspective and bring the reader to the early years of the twentieth century. The writers-Aishika Chakrabarty, Samita Sen and Aparna Bandyopadhyay-discuss the rationality or otherwise of Kulin marriages, convict marriages and their emotional and legal outfall in the Andamans and elopements. The last of these is an interesting study of elopements and their legal and social reprisals. This is a thought-provoking and an unusual section as it draws our attention to the peripheries of society and provides an interesting play of balance between bodily needs, social norms and legal interventions.