Of Sacred Landscapes in Stone 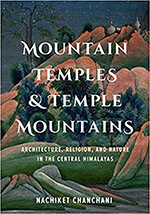 Undoubtedly, the Himalayas are a hostile terrain, especially so for those accustomed to living in the warm and relatively dry plains of India. This mountain chain has also acted as a wall that separates weather regimes and in some cases, been a deterrent to invaders. However, pilgrimage and trade, quite like its perennial river systems, have always entranced people into crossing the snowbound heights of this young yet formidable mountain chain.

Since the dawn of the human age, cultures across the snowy ridges, right down to faraway South Asia, have been in conversation. This is evident in the construction of ancient temples—not just in India, but also in the far South-East Asia—where the idea of mountain as spiritual centre is embedded in so many semiotic elements and temple architecture. Temples are usually built on higher plinths, and for most shrines verticality is a significant factor even as the Mandala, the concentric rings organized on cardinal points, with Mount Meru forming the centre, reflects the conception of the universe. There is enough evidence to show that the Himalayas, and the rivers that emanate from them, have contributed to the cosmological conception of the divine in India and in Indic cultures. But, until now there was little knowledge of how art and architecture from the faraway plains contributed to the evolution of sacred architecture of the monuments in the mountains.