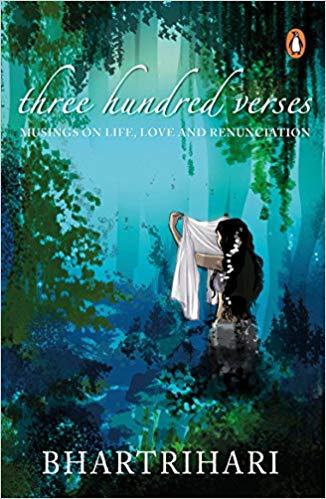 Two books translated by Haksar have been released in quick succession. They share something in common in that they both have been translated from Sanskrit into English. Otherwise they are different in perspective and context. One was Ritusamharam, reviewed recently* and the other is Three Hundred Verses, a translation of the famous Trishatakam by Bhartrihari.

In a sense, the two stand at two ends of the spectrum: one which, at least seemingly, is but a description of the seasons and the romantic mood that the season evokes and the other which, by all accounts, is a deep and philosophical rendering of the human emotions on life, love and renunciation. While it is easier to visualize a translation of the description of nature, it seems almost impossible to imagine that one can translate Bhartrihari, verse to verse for they are profound in meaning, born of much thought and reflection. They change in power and punch with just the slightest touch. How then does Haksar cope with this challenge? With  restrained passion and unrestrained elan. He says in his introduction that he is catering to the modern reader, to that claim he abides.

In the introduction Haksar also tells us that history is not able to decide who Bhartrihari was: could have been a Buddhist grammarian who alternated between ascetic and sensual life, or a ruler of the Malwa region, or a king who renounced to follow the Natha tradition or (the most popular perception of Bhartrihari) the predecessor of the legendary king, Vikramaditya.  To this Bhartrihari, whichever of them he was, is attributed the Shataka Trayam or Trishati, translated by Haksar as Three Hundred Verses. The first hundred verses are on niti, broadly translated as life/politic. The next hundred are on shringara that is erotic love and the final hundred verses are on vairagya or detachment/renunciation of the material world. Haksar has sought to arrange the verses as he feels that adds to a more flowing narrative. He mentions the numbers of the verses in two main translations/compilations that he has reffered to and how he has added some extras which are found in one compilation and not in the other.