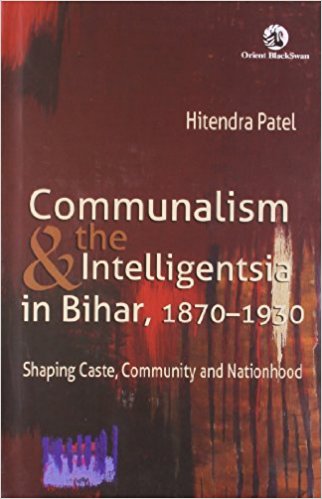 The growth of community-oriented consciousness and articulation of antagonism between Hindus and Muslims in the last quarter of the nineteenth century and in the early twentieth century have attracted considerable scholarly attention in recent times. There are also some historians who have emphasized the Hindi-Urdu controversy in their writing, the cow protection movement and the Suddhi and Sangathan movements as part of an effort to construct a ‘United Hindu Community’ on a larger front in northern India. In the case of Bihar, however, scholars have written in their works only briefly on the theme while discussing nationalist politics at large. Hitendra Patel’s book from its title seems to be a specific one on communalism although it deals only ‘with Hindu communalism and the Muslim side of the story is rarely alluded to’ (p. 1). But a close reading of the book suggests that the title is often misleading as it has less to do with how the Hindi intelligentsia in Bihar played a major part in uniting the Hindus on separate community lines and defined their relationship with nationalist forces. And so does the choice of period as 1870 or even 1870s was not the time when polarization of politics on communal lines started in Bihar.