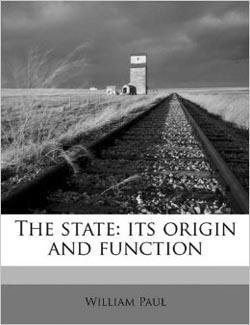 The notion of the state is central to political theorizing but ironically in Marxism. Both with the originators and its latter exponents, its account is sketchy. Hegel, who was the starting point for Marx for all his major concerns, worked out the details of a modern state by his distinction between the realm of state and the realm of civil society but Marx’s account is sketchy and reticent in working out the details of the modern state. In Marx’s writings, the future Communist society would be classless and stateless or true democracy. Engels, drawing extensively from Morgan’s work, Ancient Society, traced the rise of the modern state, a distinct institution that was territorial in character, with public power derived from the people. Progressive division of labour and the institution of private property gave the state its distinct territorial character moving it away from kinship. He traced this process from ancient times. Having relied heavily on Morgan’s work it neglected the systems in Asia and Africa and had a pronounced euro-centric bias.