Of Human Frailty and Moral Resilience 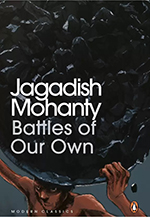 Published in 1990, Jagadish Mohanty’s Battles of Our Own offers a piercing portrait of the dying years of ‘Nehruvian socialism’ when the rot was practically, ‘out in the open’. Marked by an excessive government and bureaucratic control, failed labour movements, toothless trade unions, and widespread corruption, the late 1980s was a period of intense disillusionment with socialist ideologies and principles. Situated in the thick of this political and economic instability, Battles of Our Own is a tragic rendering of the human impact of such political turmoil.

The real achievement of Battles of Our Own lies in Mohanty’s ability to cast the industrial theme of the novel in an existential mould and lay bare the psychic landscape of his characters. The novel opens a window on a distinctive and under-represented culture and experience in Indian literature—the colliery, where politics, power and violence often go hand in hand. Set in the fictional Tarbahar colliery, in the hinterland of western Odisha, Mohanty’s novel dramatizes with gripping intensity the tragic precarity of human rectitude and dignity in an extractive world order. It is a vicious world where men outfox each other at every step and the moral arc—if at all there is one—is inevitably shaped by those in power.

A trendsetter in Odia literary culture from the late 1970s through the 1990s, Jagadish Mohanty experimented with existentialist ideas in his short stories and novels. Largely influenced by writers like Kafka, Camus, Sartre and Beckett, the self-doubting, alienated individual at odds with society became a recurring figure in Mohanty’s oeuvre. Equally fascinated by issues such as inwardness, freedom, and self-becoming, his writings portrayed the existentialist immediacy of experience of the alienated man, and the moral predicaments that such an experience entails. Battles of Our Own gives definitive expression to these themes, as evident from the thematic signposting of the title, while incorporating into itself a vast complex of notions, ideas and beliefs that drew on the profound political and economic changes of the late 1980s.

As the titular battles break out between rival trade unions and management, similarities between the sooty, shadow-ridden world of the ‘mine’ and the dark, chaotic and protean terrain of the human ‘mind’ become strikingly conspicuous. Spliced into one another, Battles of Our Own tells the story of three self-doubting, vulnerable and ‘thought-tormented’ characters—Harishankar Patnaik, a former trade union leader, Deshmukh, the company man, and Pradyumna Mishra, a young Brahmin boy from Puri who works in the colliery under the purchased identity of a tribal, Samaru Khadia. In his Introduction to the novel Himansu Mohapatra points out that such instances of identity theft were common in the colliery. The nexus of coal mafia, colliery authorities, trade union leaders and corrupt politicians paid off the tribals for whom the jobs were originally intended as compensation for the land that they lost to mining. These jobs were then sold at a huge price to non-tribals. With characters thus drawn from the three classes—worker, trade union and management—the narrative makes it clear that Mohanty’s sympathies, despite the many ambivalences in the characters, lie with the weak and the vulnerable, irrespective of which side of the ‘battle’ they are on.