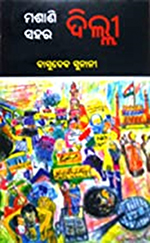 Mashani Sahara Dilli is an important book for many reasons, one of which is its sheering honesty. This Odia novel tells us stories that are marginal to the aspirational India we are supposed to inhabit these days. These are narrated from the vantage point of Anurag, a Government of Odisha officer who is now posted in Delhi for work. He lives alone in the city (we do not know where his family lives, the novel is mostly silent about it) and explores Delhi primarily through his interactions with its subaltern characters. One of the first persons he seeks out is Ramdulal, an elderly Dalit shoe repair person, who has a stall not far from where Anurag lives.

Over his stay in Delhi, Anurag becomes friends with Ramdulal, visits his stall even when he does not have any work to share cups of tea, sometimes visiting Ramdulal’s home in Sarita Vihar which he shares with his children, his wife not being there anymore. Over the course of his acquaintance with Ramdulal, Anurag gets to know of his decades long struggle to get a foothold in Delhi, after leaving his village in UP’s Raebarely district. After spending nearly five decades in the city, he has finally put down roots in Delhi. His son works as a mechanic. His daughter takes care of the house and the household.

Ramdulal’s story provides the backbone to the structure of the novel, albeit a makeshift one.

Through multiple visits, Anurag gets his life story out for us, one episode at a time. This story is perhaps, unfortunately, a common one. A Dalit adolescent orphaned by the murder of his father by upper caste men over a trivial matter, Ramdulal suddenly has to fend for himself after his mother also dies of the shock. Finding it difficult to make a living as a shoeshine boy working in trains, while living in the home of his maternal uncle, he leaves for Delhi where over a period of time he finds community and family.

Through Ramdulal’s story, the novel also provides a micro history of the slum areas of Sarita Vihar locality, where after his first few explorations in the city, Ramdulal settles down. He finds a mentor in Chandulal, who helps him clear a plot of land and put down roots. Around the same time, Ramdulal falls in love with Chhabeli, an orphaned Dalit girl who works as a sweeper in the road on which Ramdulal has a stall, and they decide to become man and wife.

Through descriptions of the visits that Anurag makes to the Sarita Vihar slums, we get a sense of the ethnographic history of this locality. Around half a century back, the area was almost a jungle through which a stream flowed. Dalits and Muslims first settled in the area, slowly cleared the forest, bearing the brunt of wild beasts such as the boars who roamed the place and often attacked people.