A Classic Novel and its Ruses 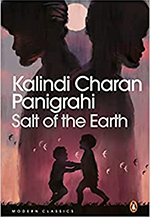 With Salt of the Earth, Matira Manisha, the classic Odia novel of 1930 by Kalindi Charan Panigrahi, has seen its third English translation. The first translation (done by Leela Ray and Narendra Mishra) went straight for the jugular in its choice of the title, House Undivided.  What this eclipsed was the novel’s rural and agrarian setting, so unmistakably captured in the Odia title, from which comes the author’s romantic-idealistic concern with the soil. The second rendering by Bikram Das, published in 2017 as Born of the Soil, restores the missing dimension. With the latest translation titled Salt of the Earth, there is a further push in that direction. And it is a very competent translation, as one would expect from the trio of seasoned translators.

But then here is the rub: the novel is about the worm in the bud of the organic rural community. That worm is the partition of family property between brothers after the death of the patriarch of the family or ‘bhai bhaga’, as it is called in Odia. It is all the more worrying because the family depicted as being threatened with disintegration is an exemplary one in the village, the family of Shyama Pradhan.

In one sense ‘bhai bhaga’ is the most dreaded word in the emotional lexicon of the Odia, nay Indian, middle class. In another sense, of course, partition is routinely common and ordinary. As agricultural families face decline, with the members of the family drifting towards urban centres and newer pastures like service and trade, the joint family system is bound to come increasingly under strain. No wonder, the brunt is often borne by the poorer—and invariably the elder—brother who has nothing but his homestead and agricultural land to fall back upon. Woe betide him if he has a large brood of his own to raise.  Add to that the presence of a nosey and crafty village council head who would stand to profit from the partition of family property, and, there is no stopping the inevitable forward march of the ‘bhai bhaga’ juggernaut.  This is what happens to the elder brother Baraju in the novel.

Baraju does, however, succeed in stalling the march of the secessionist forces. His Gandhian brand of silent and nonviolent protest, tempered with his self-sacrificing idealism, helps him to stem the rot. His younger brother, Chhakadi, who had so insisted on the division of the spoils, is left clueless by his elder brother’s unexpected reaction, besides being stunned into submission to the indomitable will of the elder and better brother. Although this flies in the face of reality—and the reality is very much that the Barajus of the world go to the wall—the novel can be understood as trying to offer an imaginary resolution to a pressing and real historical problem. This is the work of ideology, of course, and it has a name, Gandhianism. The novel was written when the Gandhi wave was sweeping Odisha. It also contended with and, more importantly, tried to contain another wave, Marxism. The Sabuja Age to which the writer belonged had shades of red mixed up with its green.