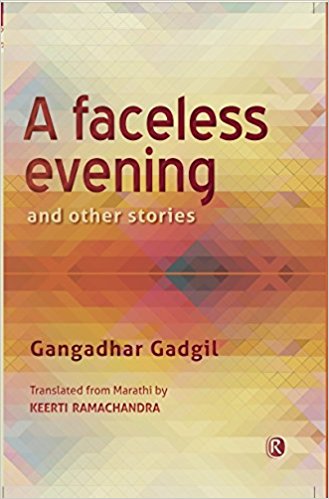 Gangadhar Gadgil is eminently readable. If you have been a big time reader of all time great storytellers like Anton Chekov, Mark Twain, Edgar Allan Poe, O. Henry, or even Somerset Maugham or Arthur Conan Doyle, you would do well not to apply the same scale here. India too has had great story tellers like Rabindranath Tagore, Krishan Chander, Premchand, Sharat Chandra, Amrita Pritam, RK Narayan, Ruskin Bond and a whole galaxy of others. Marathi literature alone has produced internationally acclaimed greats like Kusumagraj, Pu La Deshpande, Vijay Tendulkar, Namdeo Dhasal, Bhau Padhye, Satish Alekar, Daya Pawar, and many more. If you decide that you are not going to get into odious comparisons, you will certainly enjoy this collection of Gadgil’s stories.

Gadgil has been a chronicler of Mumbai—through its denizens. Decades have gone by since he wrote, but any member of the milieu about which he writes will easily recognize a neighbour or a colleague or a close relative (or maybe himself/herself) in the characters that inhabit his stories. These stories masquerade as fiction, but there is virtually no doubt that they talk about real-life persons and real-life events, either individuals or composites. Gadgil’s writings talk about verities distilled out of a life full of decently sharp observation and delicate sensibilities. This distillation of universal verities connects Gadgil to the human condition across all the metropolises of the world. But those who have known Mumbai see its presence in virtually every page, even when the events are unfolding in other parts.

‘Thirst’, with which this collection of stories begins, is located in a railway compartment, yet Mumbai is visible through its jaded characters. An over-the-hill actress, screen name Pushpa, and Bhaisaheb, her manager/agent/paramour/exploiter have had more than their fill of each other. Sheer reluctance to exert themselves prevents them from breaking free from a relationship that has long begun to fester. There is an element of masochism in the manner both the unhappy characters keep plucking at their emotional scabs and wallow in the misery of martyrdom.

There are other characters that follow in the other stories for whom Gadgil makes no effort at garnering sympathy. The sasubai of ‘Bittersweet’, Damuanna and the gossip Ganpatrao of ‘Multiplication’, Govindrao’s unsympathetic wife in ‘Before I Go’, the sour-mannered Chaubal Bai in ‘Our Teacher Leaves School’, the ungrateful nephew Ajit in ‘All for You’, these are unpleasant persons, but they still have enough humanity in them to not be detested. They can be forgiven as the products of their circumstances. There are two characters, however, for whom there is no redemption, and Gopal Padhye is the uglier one. Depraved, sadistic, wicked, Padhye has been portrayed as a complete psychopath, and Gadgil leaves us feeling that incarceration is the only answer for such unsavoury people as him. The filthy-rich stockbroker of ‘A Man, a Fairy and a Tortoise’ is the other character portrayed with the deliberate intention of evoking disgust.
Bandu is a loveable character: bumbling, hen-pecked, slightly opinionated. However, he doesn’t come off well rounded. It’s a caricature that RK Laxman would have done in a 2″ X 4″ sketch. Gadgil takes fifteen pages to do so. The characters of ‘Bittersweet’ are caricatures too, the standard supply of most B Grade Bollywood movies. Sadanand, Jankibai and Ajji are also people we have frequently encountered. But for all that, they have been done with sympathy and understanding, if not a lot of depth.

‘A Faceless Evening’ is a philosophical piece, an anguished cry of a sensitive soul at the dehumanization that advancement has brought. It’s a Kafkaesque world where nothing makes sense, the meaninglessness of the merry-go-rounds of life. ‘That Mumbai evening was dreary,’ says the author/narrator as he signs off. ‘Her hair was grey. And she had no face.’

‘Fleeting Reflections’ is another philosophical piece, but this time the narrator is full of hope. He looks back at the reformation that his wife has brought in him through love and patience, and the two are now on the threshold of a brand-new life with the impending arrival of their child.

Keerti Ramachandra’s translation is very competent. Not surprising at all, for she would have been picked up for her skills that she has proved again and again in earlier works like Vishwas Patil’s novels Zhaada Zhadti and Mahanayak, Bolwar Mahamad Kunti’s Iddath and many others. Teacher, editor, translator, mistress of English, Marathi, Kannada and Hindi, Keerti delivers the goods with panache.