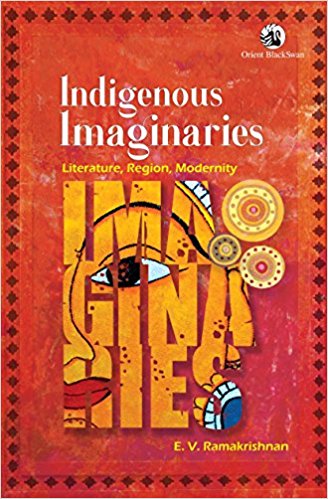 EV Ramakrishnan’s collection of essays Indigenous Imaginaries: Literature, Region, Modernity has several entry points. In continuation of his earlier work Locating Indian Literature: Texts, Traditions, Translations, he is revisiting questions of tradition, transformation and modernity by taking a deeper look into the different cultural contexts embedded in the notion of ‘region’ or ‘kshetra’ and their shaping of the literary field in India. A starting point in the text is the dynamic indigeneity in all its variations that has over the centuries negotiated rigid hierarchical power structures, sometimes opening up small spaces where potentials for larger changes are embedded. These are also spaces that are able to negotiate different kinds of crises from within. The point Ramakrishnan makes is that these spaces have not been very often taken into consideration in prevalent cultural histories tracing the trajectory of the modern or the movement towards a deeper democracy and new orders of justice.

There is then a focus on translation and its implications in bringing about a change in literary sensibilities, in engendering pluralist epistemologies and calling for a self-positioning both ‘within and without at the same time’ having several positive consequences. There is, finally, an overarching concern with comparative literature and the tasks that lie before it to be carried out with particular modes of analysis. A note of urgency is evident in this as the author feels that there are possibilities of a gradual erosion of self-identity with the advent of an aggressive globalized culture resulting in acts of violence and hatred, and it is at this point that one has to hold on to what he calls one’s ‘ways of seeing’, an act that may emerge from the perspective of comparative literature studies. I will take up this particular area as my point of entry to the text.

The point of entry is actually based upon five essays on literary historiography that constitute the last section of the text, while attempts to rewrite literary history in Indian literatures is an all-pervading concern in the text. From the beginning of the history of the discipline of Comparative Literature, from Hugo Meltzl in his 1876 essay ‘The Comparative Method and Literature’ to Claudio Guillen in The Challenge of Comparative Literature (1993), historiography has been stressed as one of the defining components of Comparative Literature. As testimony to this, the multi-series Comparative Histories of Literature, taken up by the International Association of Comparative Literature under different rubrics, have broken substantial new ground in the area of literary scholarship. Ramakrishnan points out that the notion of history and historiography has undergone many changes, but not much has changed in the writing of literary histories, except in a few cases. Traditional teleological and evolutionary models of history asserting cultural authority and territorial and linguistic boundaries leading to processes of ‘othering’ have been questioned in history writing. History is often seen as a text, a narrative, a discourse that is constructed. History is not just the backdrop of cultural texts as the texts interact with history and become part of a network that gives importance to some and excludes others. Ramakrishnan’s essays attempt to understand this layered contextualizing of literary history that uncovers various relations between social processes and literature.

The first section begins with the changes that emerges with print culture, and the negotiation of vernacular languages and literatures with hegemonic structures of Sanskrit on the one hand, and English on the other, both leading to self-doubt and inherent contradictions at a time when one is moving towards modernity. The focus is on the growing standardization of languages and the reduction of plurality into manageable accounts. Ramakrishnan’s comparative study of standardization, less in certain regions and more in others and reasons for the same, is thought provoking, while perhaps it could also be in order to bring to the foreground the resistance to standardization in literary texts like Fakir Mohan Senapati’s Cha Mana Atha Guntha in Odiya, numerous ‘naksas’ or sketches in Bangla and similar examples in other literatures. Ramakrishnan rightly claims that new acts of reading emerge putting aside the numerous strands of plural ways of being, of oral contexts, and moving farther and farther away from the many registers of language in everyday use. However, as he clarifies in a later chapter, no strict borders between the pre-modern and the modern is possible in Indian literatures as traces of the pre-modern continue to be a part of the modern, in a subterranean fashion. It is during this period also that Ramakrishnan traces the rise of ‘comparativism’ as a mode of critical discourse. Translation becomes another mode of comparativism as different epistemological structures are juxtaposed. A new idiom of writing emerges with the translation of the Bible and Christian tracts in Malayalam leading to a democratization of language usage. With the emergence of the novel, Indulekha in particular, a comparative argument takes shape leading gradually to a space of ethical resistance. There also emerged several Dalit novels in the course of the nineteenth century in Kerala, where the struggle for social justice is represented and slavery questioned throwing into focus in literary history a comparison between the mainstream novel and the narratives of a repressed class. Dissent, however, as he shows in a separate chapter was always an integral part of the Indian literary tradition, though in different ways, from the bhakti movement to the literature of the Dalits. Very significantly, Ramakrishnan points out that dissent puts to test the linguistic resources of a community as it has to find a new lexicon to convey the supremely radical view of the world.

As a continuation of his engagement with literary history, Ramakrishnan goes into the question of the reorganizing of literary forms in print culture embodying new subjectivities informed by colonial consciousness, and the emergence of new paradigms that operate by excluding large sections of people. A new kind of cognitive ‘othering’ within society emerges. In his examples, particularly from novels, Ramakrishnan shows that the novel, even while performing its function in creating a non-inclusive public sphere and to a large extent writing the nation, in some instances, also serves to unsettle homogenizing notions of the nation and of monolithic nationalist paradigms as in the novels of Rabindranath. In other instances it uncovers the faultlines that exist between the self-representation of minority communities and the ideal of secular and rational modernity upheld by the nation as in the works of Vaikom Muhammad Basheer. Bhalchandra Nemade’s Kosala, on the other hand, shows the ‘failure of the moral imagination’ underlying the organization of the nation, as a protagonist moves from the village to the city and is duped at every stage. Each novel rewrites the genre and those that survive the onslaught of time are usually those that keep faith with the oppositional consciousness defining the novel, playing with form and language at every level. Ramakrishnan is aware of this as he shows Basheer moving away from the novelistic form after Me Grandad Had An Elephant, as he ‘cannot possibly resist the integrative logic of the social realist novel which regulates the narrative’s manner of representing reality’(p. 123). Questions of focalization are raised along with those of the form’s ability to articulate the experience of the minority. Basheer moves towards what may be called the anti-novel in Pathumma’s Goat, a fragmented form, written by the author after a bout of treatment for mental illness. The analysis is outstanding as Ramakrishnan draws upon the image of the goat as central to the text, blurring boundaries between the high and the low, art and artefact, representation and lived reality. The voice of the community is restored in the narrative.

Looking at the text from the point of view of literary historiography, there is an analysis of the phenomenon of globalization as it is manifested in contemporary society and its effects on literature. While Indian culture has worked with alien traditions for a long period of time in a dialogic manner, the predatory impulse of multinational capital in globalizing processes could pose a serious threat to the ability of the culture to negotiate alien traditions and retain its autonomy. The presence of the market is all pervasive, even in the case of the ‘local’ as is evidenced by the fetishization of the ‘ethnic’ in the world market, devoid of its context. The interplay between the local, the regional and the global gets reduced day by day. In its constant production of images and related desires, globalization, the author suggests, can ‘numb our senses’ and ‘cripple our capacity for metaphors’. He again draws upon a novel from Malayalam, TD Ramakrishnan’s Francis Itty Cora, that seemingly draws upon The Da Vinci Code giving rise to a series of floating images without any coherent vision, celebrating globalization while suppressing its real stories of exploitation. It is in lived everyday reality and in the reconstitution of memory that one can, to some extent, resist the forces of globalization and retain one’s ways of seeing. Ramakrishnan again gives a very apt example, the autobiography of the social activist Kallen Pokkudan, My Life Among the Mangroves, where he struggles to resist forces of ‘development’ that tend to destroy the forests for building roads etc. He shows the survival strategies of the Dalit community in the globalized world based on living everyday experiences of the ecosystem embedded in the mangroves, in their ways of seeing.
The preoccupation with knowledge continues in his study of Amitav Ghosh’s The Hungry Tide, Mahasweta Devi’s Pterodactyl, Puran Sahay and Pirtha and Anand’s Vyasa and Vighneswara, where memory and retrieved histories are also made available for a new generation of readers thereby constructing a common platform for the mobilizing of communities. In The Hungry Tide it is scientific knowledge that would remain and help the community to move forward, while the keeper of indigenous knowledge, Fokir, will die bestowing life on Piya, the researcher from abroad. In Mahasweta Devi’s novel the urban journalist is unable to report what he has been sent to report, the appearance of the pterodactyl-like creature, for he cannot convey the sense of the sacred that gets linked with the creature that the destitute tribal community believes to be its ancestor, ‘we belong to two worlds and there is no communication point’ (p. 138), he alleges. In the third novel by Anand, there is a long passage between Ekalavya and Abhimanyu on the relation between knowledge and freedom and then again on the role of democracy in bringing about justice. ‘Knowledge can liberate only if it is inclusive and just’ writes Ramakrishnan underscoring colonial epistemological fallacies laid bare in literary texts. The three novels suggest an entry point in literary history through a problem-atization of the relation between communities and nations, indigenous knowledge and scientific knowledge, knowledge and freedom.

The text highlights the gaps and fissures that continue to solidify a homogenous, upper caste, male perspective bound by several boundaries of language, religion and nation. Why, Ramakrishnan asks, are literary historians not asking why Ravana figures as a central character in many of the Kathakali texts in Kerala? In the last section he also takes up two ‘micro-histories’ of literature in Malayalam, Anjooruvarshathe Keralam: Chilaarivadayalangal edited VJ Varghese, N Vijayamohanan Pillai and Scaria Zacharia and Nammudesahityam, Nammudesamoohan edited by MN Vijayan. Both histories relate performative traditions, political events and social history to the construction of literary canons and sensibilities. A living shared heritage within which literature unfolds receives form and meaning within the interdisciplinary context of the microhistories.

The literary history that seems to lie at the heart of the text is one that is organized around particular urgent questions and issues related to history and literature, and not around great works of literature. If one is looking at the past in historiography it is also to construct a future and it is as such that EV Ramakrishnan’s text is of utmost importance to contemporary literature scholars.