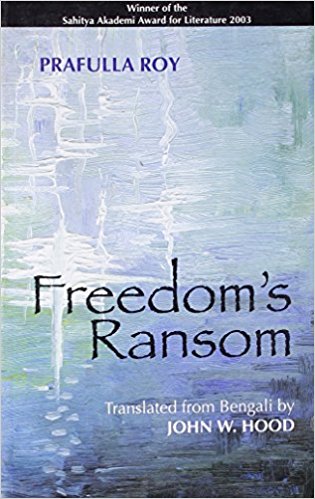 The original Bengali name of the translated book, nowhere cited by the translator or publisher is Akasher Niche Manush (People under the Sky). Prafulla Roy won the Sahitya Akademi Award for Bengali in 2003 for his Krantikal. John W. Hood, the translator of the book under review has chosen to title his English rendering differently. This shift of emphasis offers a glimpse of his sensitivity and his own reasons (that I do appreciate) for selecting for translation a book that is not Prafulla Roy’s best. However, many of his Indian readers might not too readily accept Hood’s highly laudatory observations in his introduction, particularly in its concluding sentence. John W. Hood has by now attained the stature of a seasoned translator from Bengali to English, this being the seventh book that he has translated. His first choice of Nihar Ranjan Roy’s scholarly volume might have stemmed from his own academic background and it has undoubtedly helped many reasearchers, not well versed in Bengali, or in the pre and early history of middle and eastern Gangetic system and in the region’s social anthropology.

Nihar Ranjan Roy did not proceed beyond the first millennum ad, that is, the time when a Bengali identity could be said to have emerged.

It is therefore difficult to decipher the link between Hood’s first venture and his subsequent choice of late 20th century literary products. These five or six books include poems (postmodern?), adolescent adventure and mystery stories and of course stories of partition. He has also written about serious modern films.