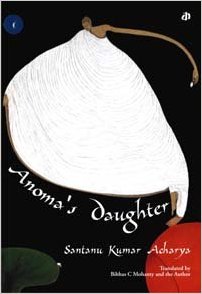 ‘There is a river. In front of it is a house that opens to a limitless horizon’ (p. 5). The novel begins with the description of this ‘limitless’ river on the banks of which is situated the ancestral house of Raghunath Kalama. Both the river and the house have interesting roles to play in the re-exploration of the Kalama family history as well as the Buddha legend. The sixth century BC paintings on the walls and pillars of the Kalama house adds to the mystery surrounding the entire place which the narrative seeks to explore. One after the other the reader meets new faces, new legends, new questions, and puzzles. Not only does the author write about the history of the Kalama household but while doing so he also seeks to trace the history of Orissa locating at the same time important events of the Indian freedom struggle after the coming of Gandhi. The narrative successfully questions the master narrative of Buddha’s birthplace questioning further the existing historical material on Buddha.

The trials and tribulations of Raghunath digging a tunnel intending to find a relic of Buddha buried deep within is well connected with the larger context of the nationalist movement. The narrative moves very subtly from pre-independence India to post-independence India recording few important events including Gandhi’s Salt Satyagraha, Quit India, formation of interim government in 1946, and Gandhi’s death etc. Fact and fiction is very cleverly intertwined but signs of struggle to fit in are not entirely absent. At times fiction seems to be forced upon historical facts. However, the manner in which the author makes use of archaeology, legends, myths, history, popular belief, etc. results in a work, which can keep the reader engrossed.

As for the title of this translated piece, one deciphers that the writer intends to give Chitrotpala a central place in the narrative as the enigmatic Anoma’s ‘firebrand’ daughter. In a playful manner Chitu proves herself to be worthy of being Anoma’s daughter when she starts analyzing the power of Satyagraha giving the example of Gandhi whose strength lies in his philosophy. She also refers to ‘satyagraha’ as being feminine in nature, a point well analyzed by critics like Ashis Nandy in his writings on Gandhi. In saying so she indirectly addresses the ‘equal-different’ problematic in feminist studies emphasizing that the specific ‘feminine’ attributes possessed by a woman are as valuable and important as ‘masculine’ attributes. Occasional references to Gandhi, makes the narrative as much ‘anti-colonial’ as ‘anti-authority’ (even denying truth to the authoritative Buddha legend). Addressing the issue of translation, one finds that the translated text is well connected to the original language and culture. It retains much of the original flavour using transliteration in words and phrases which cannot be translated without a change in meaning.

What is important is not to look at life from the perspective of what one knows, but also from that of what one does not know or has not attempted to know. Raghunath Kalama’s search for the ‘unknown’, Chitrototpala’s search for the ‘feminine’ inner strength, Ramakishore’s desire to know the ‘truth’ etc. are all different representations of human nature and human psyche which duly finds their place in the narrative. Interestingly all these searches are well connected to Buddha’s search for ultimate salvation. There cannot be one absolute form of the Buddha and yet the many forms may exist simultaneously in one human form at one particular moment. Sometimes one need not be in touch with the ‘truth’ – even a fleeting glance of the ‘truth’ may be enough to spend the whole life. The novel has the capacity to compel its readers to probe into the limitlessness of LIFE itself.

Krisha Das teaches in English, Handique Girls’ College, Guwahati, Assam. I was in Department of English, Gauhati University for a year as UGC-Junior Research Fellow and currently undergoing research for PhD at Gauhati University. As part of my research work I working on areas like nationalism in India and women’s writing in India. Other areas of interest being translation studies, gender studies, and contemporary Indian philosophy