Of a Misadventure Under the Nuclear Shadow 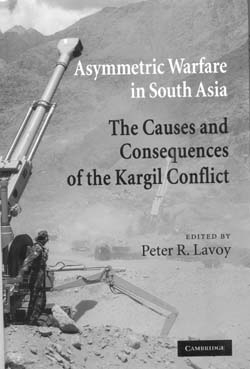 Of a Misadventure Under the Nuclear Shadow
P.R. Chari
ASSYMMETRIC WARFARE IN SOUTH ASIA: THE CAUSES AND CONSEQUENCES OF THE KARGIL CONFLICT by Peter R. Lavoy Cambridge University Press, 2010, 407 pp., 995
August 2010, volume 34, No 8

The Kargil conflict of May-July 1999 just refuses to go away. A senior Indian Army officer was indicted recently for ignoring in-formation that Pakistan had intruded across the Line of Control, but pinning the responsibility for this lapse on junior officers. Indeed, several aspects of the Kargil conflict are of abiding interest, since it occurred between two nuclear weapon powers, and could have escalated unpredictably. There were other unique aspects to this conflict. What occasioned the failure of intelligence on the Indian side? What motivated Pakistan to undertake this aggression without anticipating India’s violent reaction or the international opprobrium against its irresponsible conduct? The literature holds that nuclear weapon states do not fight each other, constrained by fears that hostilities might cross the nuclear threshold. Indeed, this conflict is only the second between nuclear weapon states—the first being the border clashes along the Ussuri river that occurred between the erstwhile Soviet Union and China in early 1969.

After the Kargil conflict, the realization accrued that conventional war between India and Pakistan was unlikely, but this did not imply that all conflict between them would cease. Thereafter, concepts like ‘limited war’, ‘Cold Start’, ‘minimum credible deterrence’, ‘redlines’, ‘no-first-use’ and so on began to gain currency and adherents.