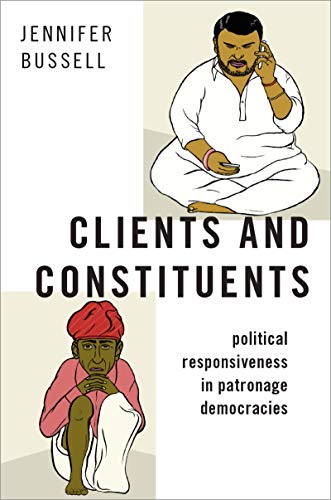 In this illuminating study Jennifer Bussell explores a frequently talked about but scarcely studied phenomenon of Indian democracy, characterized aptly as ‘patronage democracy’, describing the relationship between elected representatives and the electors as ‘clients and constituents’. Constituency service, i.e., providing the electors, who may or may not have voted for the elected, seeking access to public services and opportunities, with the requisite help is not only accepted, but an essential part of the political work of an elected representative. She indicates ‘pervasiveness’ of this phenomenon in patronage democracies. It has become even more demanding in India since the grant of development funds in the form of Member of Parliament/Legislative Assembly Local Area Development Fund (MPLADS/MLALADS) to the elected representatives at the two levels. One only has to visit an elected representative’s office, even residence, to see motley groups of expectant citizens gathered for seeking political help and assistance on issues such as obtaining ration cards, caste certificates, old-age pensions, admission for their children to educational institutions, jobs in public offices to securing local public goods for their neighbourhoods, such as streetlights, paved roads, and shared water tanks.

Clients and Constituents is a nuanced study. It establishes the prevalence of what the author calls ‘constituency service’ by people’s representatives, particularly at the national and State levels and several with large constituencies, who are not likely to know most of their constituents. Obviously, such a phenomenon raises several theoretical queries. Senior and high level politicians using their substantial time politically on providing service to constituents, not only to larger issues and problems in the constituency, but also to individual grievances and providing help to secure routine services of the state, when they are neither sure of prior electoral support from them, nor any future promise of it, is a puzzle. The groundswell of citizen requests coming to the Members of Legislative Assemblies (MLA) and Members of Parliament (MP) indicates that for some reason, these are not fulfilled at appropriate levels of government procedurally and in due course. Jennifer Bussell uses a unique theoretical framework with the support of a volume of rich quantitative and qualitative data collected at the constituency level by ‘shadowing’ (p. 40) leaders with a team of researchers. The author argues that ‘distributive politics intersects in important ways with the concept of representation and notions of responsiveness.’ Her argument that ‘(B)oth contingent and non-contingent tools of distribution—targeted policies and constituency service—be seen as forms of political representation, while clientelism instead subverts the direction of accountability between representatives and the represented’ (p. 24). She also puts her study in a comparative framework, which provides a larger perspective and adds to its value.