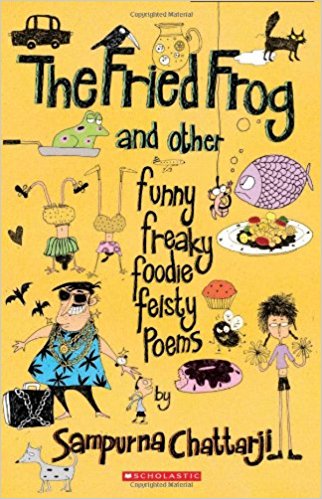 I was simultaneously intrigued and irritated by the title of Sampurna Chattarji’s book—if it were actually funny and freaky and feisty, I suspected, it wouldn’t need to say so on the cover, and the pedant in me insisted that foodie wasn’t an adjective. But it is a beautifully brought out compilation of six separate collections, and the cover has a magnificent cast of peculiar humans, animals and food.

Inside, I found that Chattarji’s titles were still slightly loud—adjectives like ‘capricious’ and ‘intelligent’ and ‘weird’ are thrown around liberally, as if telling the reader exactly how to read the poems. Which is a pity because Chattarji’s nonsense verse, when successful, is flamboyantly so.

‘Loco’ is written from the point of view of a child. It is a long list of insane adults the child knows, ending with ‘Aunty Pi who eloped with the neighbour’s son,/a wicker basket, a cocker spaniel and a Kalashnikov gun.’ My other favourite (it’s that kind of book, the kind one takes very personally) goes like this: