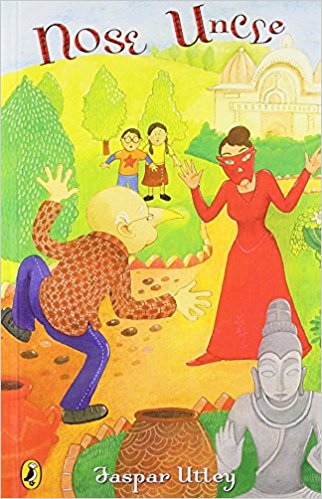 It does not take much to guess why the main protagonist of this unusual mystery novel is called Nose Uncle. But unlike most people with outsized honkers, Nose Uncle, whose real name is not disclosed, is proud of his nose and insists on being called ‘Nose Uncle’ and nothing else. He has good reason to be. Not just since: ‘It was not just a prince or a king among noses, but a mighty emperor . . .’ but also because it has certain unique attributes that are extremely helpful to him in his profession as an archaeologist as well as his spare time occupation of detective by chance. This, however, is not information that should be divulged in a review. Suffice it to say this extraordinary appendage can sniff out the colour of truth. The book begins like many children’s adventure stories with the two child protagonists Nisha and Ram being sent to spend their holidays with a somewhat unlikely chaperone—their father’s much older brother.

Naturally they are not happy about it and protest saying, ‘He’s very old,’ and ‘It won’t be much fun.’ Soon they find out they could not have been more wrong because their stay turns out to be a roller coaster ride full of hair raising but fun-filled escapades.

Nose Uncle lives in a village on the south east coast of India and grows mangoes, apart from his other activities. He uses some of the profit from the orchard to support the education of the village children. This last factor becomes important in the development of the story. When he requests Nisha and Ram to accompany him to a dig in the vicinity of his village and help him in his work, they are totally unaware of what they are getting into. Ram is eager to find treasure and in a way, they do because in the process they pick up interesting facts about archaeology and also learn something about the history of the area. When their digging is interrupted by a visit from the ‘official busybody’ suitably nicknamed Lentil Brain by Nose Uncle and two unpleasant foreigners Professor Andre Rigolet of the doubtful sounding Free University of Central Quebec and his colleague Ms. LaCroix, who claim the site and order them to leave, we perceive the beginning of a conflict situation.