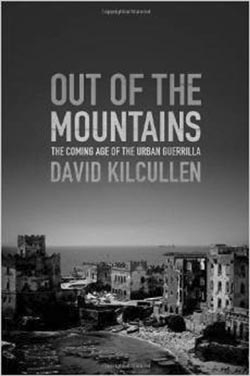 New Theatres of Conflict
Bibhu Prasad Routray
OUT OF THE MOUNTAINS: THE COMING AGE OF THE URBAN GUERRILLA by David Kilcullen Oxford University Press, New Delhi, 2014, 342 pp., 795
December 2014, volume 38, No 12

British Army General J.F.C. Fuller, architect of the great tank battle at Cambrai, described the cities as impregnable in conventional wars. Tanks could never enter the narrow streets of the built up areas and should they succeed and move deep, it was easy to cut their supply line by the defending forces. During World War II Russian cities like Moscow and Leningrad withstood the Nazi assaults. In changed times however, cities, symbols of political and economic power as well as citadels of technological advancement have not only become the targets of choice for the terrorists, but are also immensely vulnerable for their networked existence. Worse still, the attacks which have been witnessed so far on urban environments, are in a process of constant evolution. In this context, David Kilcullen’s Out of the Mountains: The Coming Age of the Urban Guerrilla, demands a thorough reading.