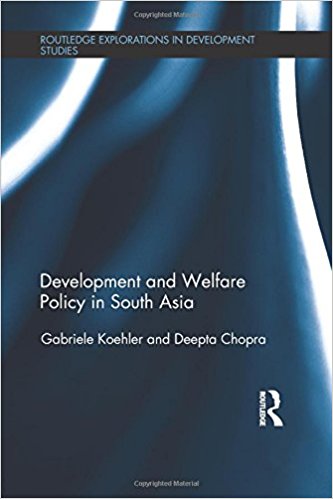 Despite the significant achievements in poverty reduction made by the South Asian countries, the region remains home to over 40 per cent of the developing world’s total poor. More than 570 million people survive on less than US$1.25 a day and over 60 per cent live without adequate sanitation. To compound the challenges of population growth and poverty, environmental degradation and climate change, South Asia has also been exposed to increased frequency of natural disasters, which is undermining the sub-region’s economic performance. With a rising interest in the role of public policy and the role of the state in the developmental process, Development and Welfare Policy in South Asia is a welcome addition to the development studies literature.

The different strands of thinking about the role of the state, the responsibility ascribed to government involvement in human development and the heightened attention to social policy obviously take different forms in different countries and regions but seem to point in the direction of a certain renaissance of the welfare state.  Köhler suggests four overarching policy domains—policies addressing the basic social situation; policies addressing socioeconomic insecurity; social assistance policies and programmes addressing poverty; and policies for voice and social inclusion, with sets of policy measures or programmes constituting elements of social policy in a welfare state with a right-based approach. Though the list is illustrative, the author finds some commonalities that are all aimed at addressing human development, well-being and inclusion. Thus, despite the political differences and rivalries among the countries in South Asia, there are observed commonalities on many levels, and the conceptions of the role of the state, the language of rights and the state’s responsibility vis-à-vis its citizens set a certain policy tone, she observes.

Aniruddha Bonnerjee analyses the role of fiscal space in the region and concludes that overall public revenue in the region which is in the order of 11 to 12 per cent of GDP, has been stagnant and has merely kept pace with GDP growth during the last two decades. He suggests that allocations to finance social expenditure could be increased by reallocating other expenditure such as excessive military spending. Military expenditure, however, is an essential component of national security, and cannot be compromised in the evolving regional and global geopolitics. Indeed, he writes, ‘the ability of the welfare state to leverage resources to finance development depends on government credibility, capacity and willingness, as well as the evolving international geopolitical landscape.’ Highlighting a dramatic growth in the corporate-private sector, Bonnerjee suggests that the private sector, in the South Asian context, could be (and is) emerging as a major partner in the social sector and an important ally for the welfare state, especially in sectors like education, health, infrastructure, telecommunications and finance. He underlines that there is scope to assess the capacity and regulatory framework of the welfare space in order to expand it to include the private sector, either as a source of tax revenue and/or as a service deliverer.

Bonnerjee further talks about the unseen contribution of the family network, informal sector employment and so-called non-productive activities, which has played a major role in enhancing social well-being, and in providing the first and most immediate protection against shocks and risks for millions of families. According to one estimate, the total income earned a year by the people of South Asian extraction living and working abroad is approaching $2 trillion a year. This is 10 per cent more than the combined South Asian national income. The large amounts of remittances that are flowing into the region from several places that have a large concentration of South Asians, are producing profound socio-economic change in the subcontinent. This change is seldom included in the South Asian developmental story. The concrete financing mechanisms that could yield additional expenditure is a limit of this analysis.

Part two examines social policy development in the six South Asian countries of the region. It explores the different social policy innovations that have been introduced in the region since 2004. Chapters in this section demonstrate interesting examples of new social protection developments in particular in Pakistan (an income benefit for women), in Nepal (a new child benefit), in the Maldives (innovations in housing and transport) and in India (i.e., a whole array of policies addressing education, health, the needs of ethnic minorities and informal sector workers as well as the self-targeting employment guarantee schemes for the rural unemployed). Assessing the situation in Pakistan, Haris Gazdar considers the Benazir Income Support Programme (BISP) as a significant moment, and underlines the noteworthy role played by the interest and commitment of the top political leadership (of PPP). Undoubtedly, the role of political leaders is a critical factor in the developmental process. Wahiduddin Mahmud and Simeen Mahmud, in their chapter on Bangladesh, see strengthening the voice of the poor and socially marginalized as ‘the real governance challenge’. Studying the Indian case, while Chopra observes continuity of anti-poverty measures with just changes in names of programmes under different political dispensation, she also notices changes in the nature of social policies after 2004, and envisages ‘a new era’ of right-based policies in India.

Though various chapters analyse social policies and the role of the state, they largely ignore other elements such as role played by nongovernmental organizations, international organizations and civil society. Similarly, the role of technology and communication, for example, mobile phones, would add value to analyses. Indeed, in the history of mankind, never have any devices left so strong an impact in socioeconomic spheres, as cell phones. In India, the phone is not only making and breaking customs, but effectively, it also maintains the new dynamism that has emerged as its own end result. Also, leaving aside the ‘implementation dynamics’ does not provide an accurate account of the ground reality.  Further, the role and effectiveness of the classical social security instruments has largely been overlooked in their analyses.

The final and third part of the book returns to the fundamental question whether there is a unique type of South-Asian welfare state. Bonnerjee analyses the structure of social expenditure in six South Asian

countries, though he has excluded Pakistan and included Bhutan in his analysis. He, however, informs readers of the unavailability of data for Pakistan in the annexure.

He finds a positive relationship between

and new partnerships to tackle the struc-

tural causes underlying the endemicity of inequality, exclusion, poverty, human development and well-being as the region marches ahead.

Chopra underscores the fact that the South Asian countries are on a journey in which notion of welfare, development and rights are being upheld to varying degrees in various countries. It is, however, difficult to find evidence of a distinct geography of welfare in South Asia. At present, with many countries with remarkable growth rates, the fundamental question is increasingly how to live responsibly (for example, in terms of the environment) and well amid plenty, or how to manage the fruits of economic growth. Nevertheless, this book offers a lucid, comprehensive and judicious account of the development and welfare activities in the South Asian region. It traces policies in the area of education, health, and social security. It features the intentions of policy makers, discerns the design and blueprints of welfare policies and tracks the process and politics of change. That combination of approaches makes it an essential read for the scholars and policymakers striving to understand development and welfare policy and their patterns in South Asia.

Rajeev Ranjan Chaturvedy is a Research

Associate at the Institute of South Asian

Studies, NUS, Singapore. He can be reached at isasrrc@nus.edu.sg.